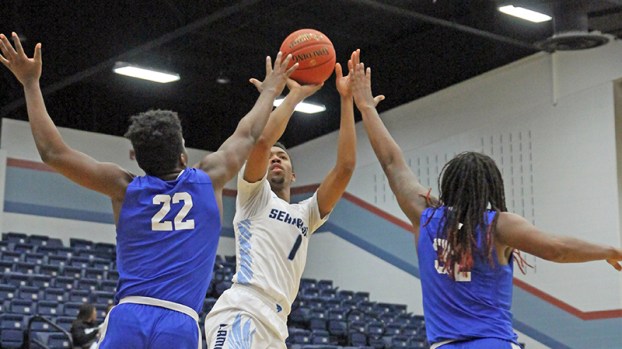 Lance Madison shares the same sentiment that many other area coaches have expressed during the early stages of the basketball season: His Seahawks are still in a developing process.

The Lamar State coach says he picked the pre-conference games the Seahawks have been playing specifically for the challenge they’ll bring.

“The reason we put this schedule together, the simple fact is to get us ready for conference,” Madison said. “We feel like we play in the toughest junior college conference, and when you’re playing teams of a high caliber you’re getting tested every night.”

Madison says the Seahawks (4-7) had the chance to add more wins during the Pensacola tournament last week.

“We’ve just got to be mentally tougher, stay focused,” he said. “We kind of lost our attention span a little bit, but in all fairness to the guys, we’re playing high level competition. Four of our six losses have come from teams that are ranked in the Top 25 this year, so we’ve been right there within striking distance. We very well could have won three more games than what we have.”
The Seahawks’ two losses at the Pensacola Tournament came from Tallahassee, which was ranked No. 13 last week and is No. 10 this week, and Northwest Florida, which was No. 18 last week and didn’t rank this week.

“I was happy we went to probably the best tournament in junior college basketball on Thanksgiving, and we beat Pensacola State, the home team,” Madison said. “We were the only team that beat them in their tournament.”

Devaughn Thomas continues to be the Seahawks’ top scorer, with 165 total points in 233 minutes from a 55.1% rate on field goals and 37.5% on threes. Memorial High School graduate Jamyus Jones is second in scoring with 132 points from 214 minutes. He’s made 45.3 percent from the field and 34.5 percent from behind the three-point line.

Panola (10-2) sits at the No. 17 spot in the latest national rankings, and they’ve won both games against conference opponents so far this year, Jacksonville College with 98-90 and Victoria College with 100-64.

The Ponies’ Cameron Carson has connected on the most shots for his team, putting up 46.6 percent from the field and 44.4 percent of his threes for a total of 162 points out of 220 minutes of play.

“We’ve got a tough opponent here Saturday with Panola,” Madison said. “It’ll be a challenge but we have to focus on the process. That’s what we’ve been doing all year, focusing on the process and not so much the end result but the process of becoming a champion and winning games.”

NEDERLAND — The basketball season arrived and teams are getting in valuable floor minutes for their still-developing teams. Nederland is... read more