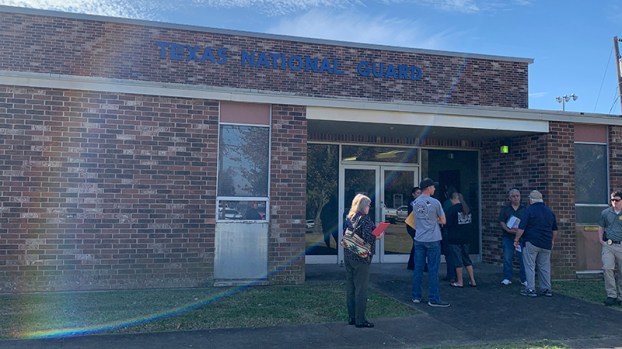 PORT NECHES — Residents of Port Neches close to the TPC chemical plant were greeted late Wednesday night with news of a voluntary evacuation. Officials detected that high levels of Butadiene gas were emanating in the immediate area and urged residents to leave their homes or take an immediate shelter-in-place.

Calvin Carter, who lives on Montgomery Street, a mile from the plant, was one of many who evacuated Wednesday night.

Carter recalled the first explosion on Nov. 27, and the feelings of anxiety it brought.

“I knew it wasn’t thunder,” he said. “I opened my door and saw yellow specks flying in the area going up through the trees. I saw flashes of yellow, blue and orange just exploding.”

Carter, an art teacher at Port Neches-Groves, fell asleep on the couch the night before the explosion, which immediately woke him up after his A/C unit fell out of the window.

“I went into the yard and it was so surreal,” he said. “I remember looking around thinking ‘am I dreaming this?’ Then people started coming out of their houses and we realized the plant blew up.”

After an official roaming the streets urged everyone to take safety precautions, Carter didn’t hesitate to evacuate immediately, thinking only of his 8-year-old son Austin’s safety.

“I remembered feeling this fear,” he said. “I grabbed my kid and drove as far as possible. I went to Beaumont at first and then to Houston.”

Returning home the next day to grab essentials, Carter ended up in the midst of the second explosion.

“I went back to town to grab a few things and that’s when the second explosion went off,” he said. “There was a mad rush to get out of there and I felt like I was in one of those western films and I had to get on my horse and take off.”

As a teacher at PNG, Carter said returning to school Tuesday made him feel as if everything was finally sorting out. Then came Wednesday night’s third evacuation call.

“It was kind of weird (Wednesday), because school was really good,” he said. “Everyone was in pretty good spirits, but at the end of the day Austin was being moody and he wanted to go home. About that time, I get the message to evacuate or shelter-in-place.”

At approximately 10 p.m. Wednesday, the city of Port Neches and plant officials called for a voluntary evacuation or shelter-in-place. Not feeling safe at home, Carter once again fled the city.

“I didn’t feel safe with a shelter-in-place with a chemical release, something you can’t see and don’t know what it does,” he said. “I kept checking (online) and tried to figure out what to do. I kept trying to see what direction the wind was blowing and once I heard some other people left, I decided to go.”

Once he adjusted his only paint respirator mask on his son, he tookoff down Highway 90 toward Houston.

“I put one of those masks on Austin and I didn’t let him take the mask off until we got to Beaumont,” he said. “He was pretty nervous, asking if the plant exploded again.”

Carter said he remembers it as if it was all a dream.

“You just ask, ‘is this really happening? What do we do?’” he said. “Everybody was so concerned about getting their kids to safe situations and most people left as fast as they could.”

The voluntary evacuation was lifted Thursday afternoon around 12:45 p.m. Carter said he is choosing to remain in Houston throughout the weekend to continue monitoring the situation from afar.

“The weird realization was coming back and wondering if this thing keeps going, is it going to take out my job and my home?” he said. “I never thought any of those plants would really go up like that, you get complacent and you don’t think about it. Then this happens — it’s been a different experience.”