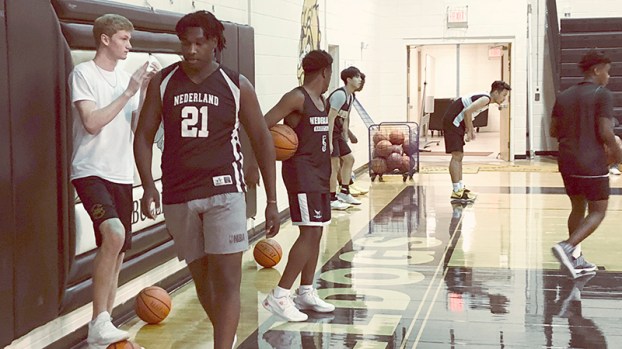 NEDERLAND — The basketball season arrived and teams are getting in valuable floor minutes for their still-developing teams.

Nederland is doing its part providing by hosting its annual Bulldog Classic today through Saturday.

“It’s going to be really strong,” Nederland head coach Brian English said. “A team out of Houston is coming, Sharpstown, and they’re going to be strong. We’ve got a good field this weekend.”

Nederland, Alvin and St. Pius make up one pool for the first two days. The Bulldogs will play Alvin at 6 p.m. Thursday and St. Pius at 10:30 a.m. on Friday.

“We open up with Alvin and St. Pius and both of those teams are pretty good,” English said. “But the pools are pretty even, West Brook’s in there, Lufkin’s in there, so it’s a strong field and it’s going to be very competitive.”

The Bulldogs won their tournament the last two years, though it’s still early enough in the season that English doesn’t know how this year’s Bulldogs compare to last year’s.

“I don’t know if we’re playing that well, but I promise a good time to get things going,” he said.

Part of their continuing development involves getting the younger kids and older kids to get to know each other. Nederland has 10 seniors, five juniors and five sophomores on the varsity team.

English says his team is still trying to figure out who needs to be on the court. Some less experienced kids are playing quite well and some of the more experienced kids played well last year but haven’t come to full speed yet this season.

Among those younger players are sophomore Charles Olsen and junior Joey Hebert who both play as guards.

“Right now Jackson is playing really well for us,” English said. “He’s one of our big kids, he’s got a year of experience, he’s really had a good summer and he’s kind of turned a corner for us.”

The games this weekend will give Nederland a chance to continue to refine their game. Coming off the heels of a 57-44 loss to Crosby, the Bulldogs (3-2) needs to keep working on defense, ball control, and chemistry.

Crosby came in here, and they looked good warming up, and they were good, they have a couple of good guards and a couple of big kids that can rebound it, basically last night they were better than we were,” English said. “They played better and wanted it more, I thought they were solid.

For the past three years Mollee Priddy has been a leading scorer for the Port Neches-Groves Indians. Her history is... read more