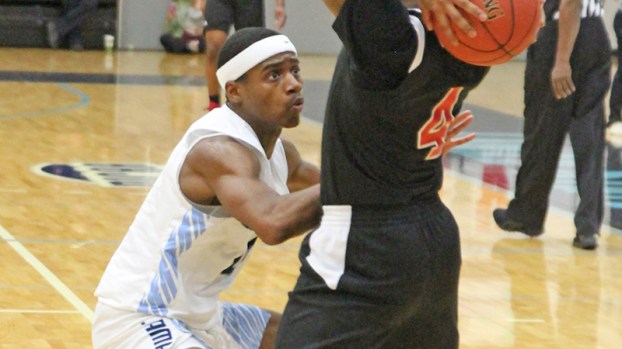 Jones regularly leads the Seahawks in scoring. In 10 games and 214 minutes of play, he has scored 132 points, collected 35 total rebounds, dished out 19 assists and created nine steals. He put up 18 points in the 72-71 win against Pensacola at the school’s Thanksgiving Tournament last Tuesday.

“I just play hard, real hard,” Jones said. “If you’re missing your shots, you play hard and it will come back to you. Just hustle on plays when you get out there.”

The Memorial High School graduate has made 48 out of 106 field goals and 19 of 55 threes. Only fellow sophomore Devaughn Thomas has taken more shots.

“What separates [Jones] from the rest is his motor,” Madison said. “He has a high energy, he rebounds the basketball, he gets loose balls, he’s very athletic. Against Pensacola he shut down their leading scorer that broke loose and had three three-pointers in the first half, and we put Jamyus on him and the kid never scored the rest of the game.”

Madison has seen Jones’ defense improve this year, and Jones agrees he’s gotten better, though he could still hone in more.

“I need to work on driving harder and still rebounding,” Jones said. “Defense is good but I can always work on better defense too.”

Focusing on basketball has enabled Jones to develop into the basketball player he’s become, Madison said, and he’s continuing to get better.

“He’s playing on both ends of the floor, not just scoring the ball,” he said. “He’s also playing good defense. He’s been focused this year and he’s been engaged from the get go. I’ve seen a difference in his work habits and just being focused. He’s had some personal growth. I’m proud of him.”

The Seahawks head to Bossier Parish Community College today, playing the Cavaliers at 7:30 p.m. If the Seahawks show as much hustle as Jones does, Jones believes the team will do well.

“I think we’re getting better,” he said. “We’re getting all the jitters out right now because we have the freshmen and some redshirts. But if we get it all out now I think we’ll be fine. We’ve just got to go in there, play harder and come out with the win. We don’t play hard at rebounds, we aren’t going to get it. It’s what we’ve got to do.”

The Museum of the Gulf Coast Halls of Fame showcases people from the area who have gone on to do... read more