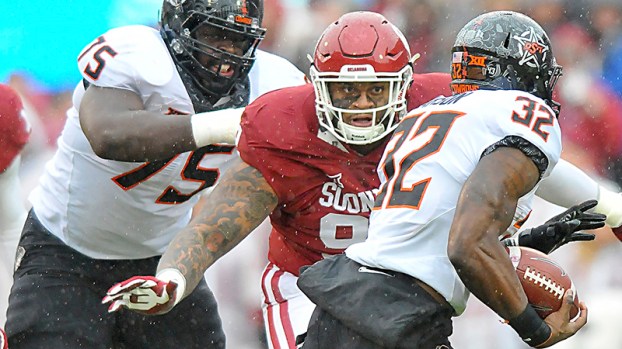 Matt Romar fought through injury in 2016 to help the Oklahoma Sooners win the Big 12 championship and reach the Sugar Bowl against fellow Memorial graduate Kameron Martin and the Auburn Tigers. (Courtesy photo)

A different perspective can help keep you grounded.

When I was young I had plans — big plans — for the things I wanted to do with my life, even though those plans changed frequently. None of them came to pass, and that’s OK.

Part of accepting a different lot from the one you envisioned involves realizing others have been in a similar situation and come through fine. Matt Romar’s story can bring real comfort in this regard.

Romar knew he wanted to play in the NFL since he was young. Football was his ambition, and it paid off for him all the way up to the edge of the NFL Draft.

He played on the varsity at Memorial High School for three years. He worked so hard at the game that he began receiving offers to play at a whole bunch of different colleges. He picked Oklahoma.

Romar redshirted his freshman year, but that wasn’t going to slow him down.

“I worked my tail off,” he said. “By the time spring was over I was starting. That was all in a month of work. I went from sixth string on the depth chart to starting at the University of Oklahoma. It felt even better for me knowing that I worked and accomplished what I had without it being handed to me.”

He continued to work on improving his Draft prospects while playing for the Sooners until a back injury abruptly ended his entire football career. Romar learned plans don’t always work out.

Uncertainty settles in, and that can be scary — I know it was for me. For Romar it was a life-redefining moment.

“My mom raised six of us by herself, four boys and two girls, and I had everybody depending on me to make it,” Romar said. “I understood that’s why I worked so hard. I’m the sixth; I’m the baby boy. I knew what I had to accomplish and what I was doing it for, and it just shook my world up. I really didn’t understand why it happened, and to this day I still think about it.”

Romar, who had never held a job, kept to his faith in God and started working. One job led to the next, some of those steps earning him a little better pay.

After a year of working back home in Port Arthur he applied for a job at Motiva that would pay a whole lot more. To his amazement, he got it.

“I kid you not, this is why I say it’s nothing but God, just the way how I was placed in these positions and the people I’ve met,” Romar said.

Romar still has much of his life ahead of him. His football-playing days are over, but there’s no real way of knowing where he’s going to be or what he’s going to do in the coming decades. Like Dave Mire, the baseball star that played for PNG, Panola and Sam Houston, great things could be coming for him and he doesn’t even know it yet.

His planning for the NFL helped him in the long run, though, as it taught him how to work hard at a goal. That must be part of the reason why he found his footing in Port Arthur so quickly. It’s still important to plan whenever possible, but to also be open to unforeseen outcomes.

And besides, some of my plans are flexible enough that they don’t have to be tackled in the short-term future. There’s still time, for Romar and me.

LETTER TO THE EDITOR — A plea for domestic violence awareness

Dear Editor: Hello, my name is Aileen Nguyen and I am currently a freshman at Lamar University. I wanted to... read more