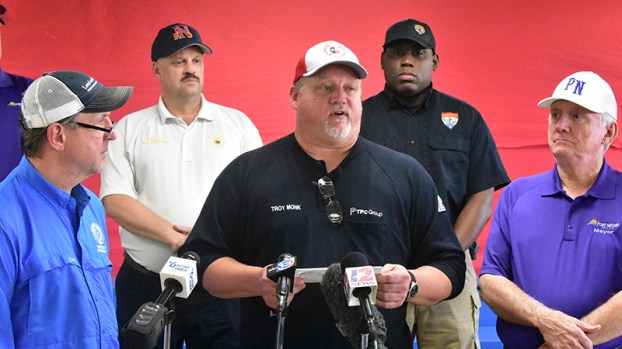 PORT NECHES — A TPC Group official said the refinery followed its own emergency plan as flames shone in the overnight sky and smoke continued to billow from an explosion that occurred early Wednesday and injured three people.

“We certainly did reach out immediately,” said Troy Monk, TPC’s director of health safety and security. “We knew the scale and the size of the event would overwhelm our ability to manage it in-house, and that’s part of our plan, call for help. It’s fourth-and-long and we’ve got to get some additional help up here. We certainly did that.”

Assistance from the Port Neches Fire Department, Huntsman and Sabine Neches Chiefs Association helped TPC reduce the fire from its Texas Highway 136 Spur facility, but a thick, black plume of smoke has constantly moved southward, and residents may have begun experiencing irritation from the smoke.

A toll-free phone number was established for those who sustained damage to their property as a result of the explosion. Those who were affected may call 866-601-5880.

Instead of immediately extinguishing a fire that erupted from TPC and shook up Jefferson and Orange counties, Monk hoped the ongoing blaze would be contained further to the point of extinguishment.

“In this particular instance, you talk about extinguishment instead of containment,” Monk said. “Our job right now is to contain the fire. We want to try to minimize the area of impact and try to minimize the fire’s impact with adjacent equipment. When fire has an opportunity to expand out, metals are only going to last so long in that heat and then begin to fail, and then you’re going to begin to compound the event. Our primary goal in this defensive strategy is to put water on the equipment and in and on those fires so we keep things cool so we don’t compound the event by having a tank fail or having some type of issue that way.” 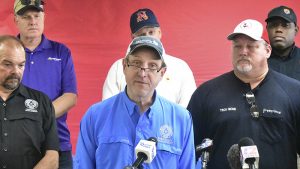 Monk reiterated neither the cause of the explosion nor the chemicals that may have been sent into the air are known.

“At this time, that’s not our focus,” he said. “Our focus is on responding to the event. We will be creating an investigation team and we will seek the root causes of the event, certainly to fully investigate the event and why it occurred.”

Two TPC full-time employees and one contractor were sent to the Medical Center of Southeast Texas for treatment, with one of the employees later transferred to Houston Memorial Hospital. Monk declined to discuss the extent of their injuries, but all three have been released.

TPC employs 175 people, with an additional 50 working on site as contractors. Monk estimated 27 to 30 people were at the site at the time of the explosion.

TPC has set up an emergency operating center at Huntsman Port Neches.

Port Neches Mayor Glenn Johnson defended TPC as “a very good citizen of our city,” adding his heart went out to the workers.

“They have right off the bat shown concern for the citizens of Port Neches, which is my concern, and they always have been the workers and the citizens first and then the assets of the company,” Johnson said. “That says a lot to me.”