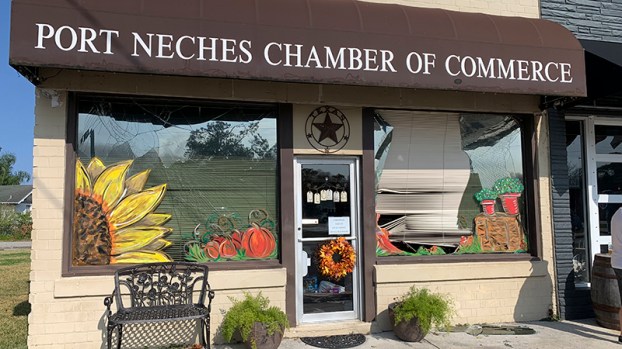 PORT NECHES — Just down the street from the TPC Group chemical plant in Port Neches lays the heart of the city’s local business hub. Several of the storefronts along Port Neches Avenue were left with shattered glass, loose tiles and property damage after the plant’s explosion early Wednesday sent a jolting shockwave down the street.

Port Neches businesses such as The Avenue Coffee and Café, Mike’s Old Fashioned Soda Fountain and Keys and Strings Music received a considerable amount of damage.

Calvin and Kathleen Odom, owners of Keys and Strings, lost all their windows, which exploded inward causing damage to two of their keyboards and a couple of guitars.

“We have a couple instruments that were displayed just inside the window,” Kathleen said. “Two of our keyboards have shards of glass in them and three of our little guitars are nicked up from shards and busted.” 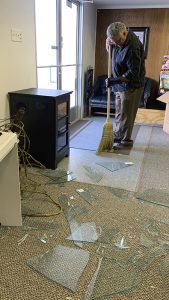 “We thought that someone had broken into the store,” she said. “Before (Calvin) really knew what was going on, we were out here. We live a mile away from here, so the noise was pretty substantial. We have damage to our instruments and we’re finding mirror shards all over the place. Luckily, we did have hurricane plywood on hand so that’s what we are putting up temporarily.”

Meanwhile, BJ Transport next door lost one window and Leo Weeks Photographers suffered only a slight crack in glass and a few knocked-down ceiling tiles.

“We’re very fortunate,” Brad Corley, owner of BJ Transport said. “We lost one window, while others down the street lost everything. We’re in pretty good shape, luckily.”

Across the street, The Avenue Coffee and Café sustained significant damage to their windows and front door.

Megan Hockett and Madison Smith, workers at the café said they arrived around 7 a.m. to find the damage and were immediately put to work cleaning glass and debris.

“The windows were completely shattered,” Hockett said. “But none of the equipment or glasses were broken. When I saw the windows this morning, I thought for sure all the cups and mugs on the shelf and art hanging on the walls would be broken. I’m surprised it wasn’t worse.”

Once the windows are boarded up, Hockett said the shop will be open for the day. 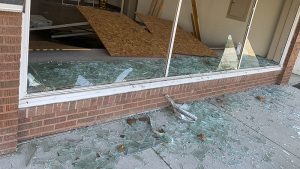 PORT NECHES — A TPC Group official said the refinery followed its own emergency plan as flames shone in the... read more