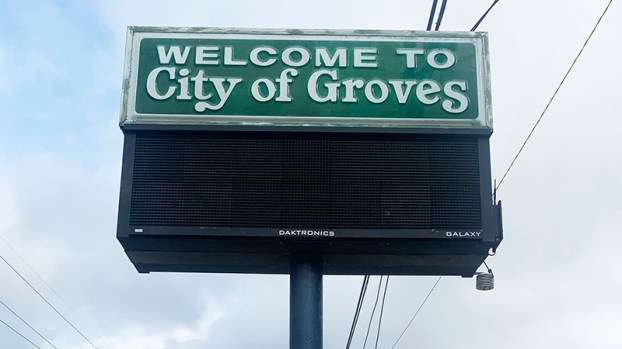 GROVES — With the turn of the New Year only several weeks out, visitors and residents of Groves will be welcomed to the city in 2020 with a new LED sign right outside the Groves Activity Building on 39th Street.

In Monday’s Economic Development Corporation meeting at city hall, the EDC board unanimously voted to purchase a brand new LED sign to replace the current sign, which has been obsolete for years.

“We have demoed out that sign for several years and it’s something we really want to get back in operation,” Groves City Manager D.E. Sosa said.

The new sign is promised to be bigger and better. Moving from its original 2½ feet-by-8 feet size to 5 feet-by-8 feet. It will also be in color.

“The bigger one is more visible and open to people driving down 39th Street,” Sosa said. “It’s graphics. It’s colors. The last sign we had was just yellow and black. It is pretty much state of the art.”

Sosa said the new sign will bring many benefits to the city and the local community.

“We would make this available to our businesses,” he said. “Any business can advertise on it. It’s programmable and two-faced. It would be colored. I think it would be a real nice addition to put this back in service, not only to help the city as a whole to advertise things like weddings, welcome homes and anniversaries, but it’s also an advertising tool for our local businesses.”

Current Mayor Pro Tem Sidney Badon said he expects the open advertisement to be an asset.

“You’ve got businesses that need a boost,” he said. “I guarantee this will work. Even if they have to pay a $150 a month or even a week, it will be worth it and will definitely increase sales.”

The EDC is currently working on a fee schedule for business advertising, which will be posted to the public as soon as possible. An American-based company called Daktronics will build the sign, which was approved for $37,000.

The new symbol of the city will replace the current “Welcome to City of Groves” sign, which will be relocated within the city limit.