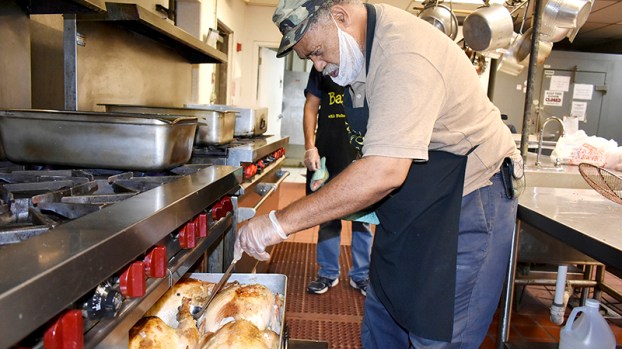 Michael Bowser bastes turkeys in the industrial kitchen at the Hospitality Center in preparation for Thanksgiving. (Mary Meaux/the News)

As families get ready for their Thanksgiving meal, picking up those last minute store items, there are groups of people working together to help those in need.

On a busy Tuesday morning, the volunteers at the Hospitality Center, 3959 Gulfway Dr. in Port Arthur, were in place and the daily meal was ready to be served. But some of these volunteers were preparing for the bigger feast on Thursday.

Ricky Webb was busy with the cornbread mix, Michael Bowser was basting multiple turkeys and Ben Harper was chopping the meats to be used in the cornbread dressing.

“All together we’ll have 26 to 30 turkeys,” Christina Vara Green, director of the Hospitality Center, said. 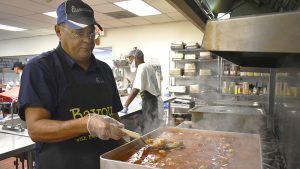 Gordon George with Port Arthur Noon Sertoma club stopped by to drop a few things off. His club is cooking and donating 10 turkeys.

Action Restoration also cooked up and donated some turkeys and a woman donates the pies every year.

The menu will include fresh yams with marshmallows, pecans and brown sugar, Green said, adding that the yams are from The Giving Field in Beaumont where students planted, picked and donated the yams.

John Vega has been volunteering there for four years. He comes in every Monday and Tuesday and was working on 15 gallons of beef vegetable soup made with fresh ingredients.

When asked why he volunteers, his answer was simple. He pointed skyward and said “the Good Lord.” 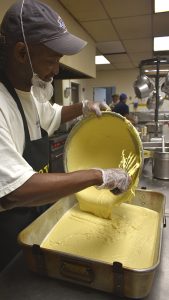 Ricky Webb pours cornbread batter in a pan at the Hospitality Center in preparation for Thanksgiving. (Mary Meaux/the News)

“And two days of the week I put aside to volunteer,” Vega said. “It’s amazing to see so many ‘thank yous.’ To me, it’s a calling.”

Green moved around the kitchen answering questions and greeting visitors dropping in with donations.

“They are the ones that make it happen,” she said of the volunteers.

While the cooking was going on, a group of mostly ‘first timers’ with Nederland Child Nutrition Association waited to jump in and help. A majority of the group wore t-shirts with their organizations name and “if you think my hands are full you should see my heart” written inside of a heart. 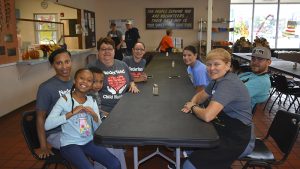 A group of volunteers with Nederland Child Nutrition Association wait to serve a meal at the Hospitality Center on Tuesday. They include, Tanisha Bodden, left, and her children Zoe and Zion, Darla Ramirez, Sandra Green, Kaylee Bourque, Alex Chamblee and Deborah Chamblee. (Mary Meaux/the News)

Elsewhere, Marvie Bonnette, Vickie Dionne and Jodie Wood posed for a photo next to two shopping carts filled with brown paper bag lunches. The women are with Aurora-Golden Triangle Sertoma Club and come in to make sandwiches that the Center’s guests bring with them when they leave so they can have a snack for later.

Christina Green was especially proud of this, saying it’s the best feeling in the world to know the guests can have something to eat after they leave.

The Hospitality Center is part of Catholic Charities of Southeast Texas and is open 365 days a year. The Center opened on Christmas 1987 and volunteers are welcome. Groups wishing to volunteer are asked to call first and schedule with Green at 409-982-4842. 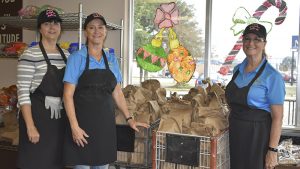 Marvie Bonnette, left, Vickie Dionne and Jodie Wood, members of the Aurora-Golden Triangle Sertoma Club pose for a photo next to baskets of bagged lunches that will be sent with guests after their meal at the Hospitality Center. (Mary Meaux/the News)

A bulldozer digs up dirt as crews from Gulf Coast, A CRH Company, work on building a new concrete... read more