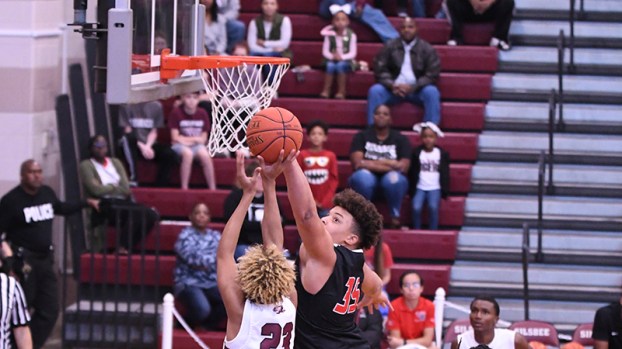 Kenneth Lofton Jr. (35) blocks a Silsbee player during the Memorial Titans’ 81-48 win against the Tigers on Saturday. (Jereem Augustine/Special to The News)

The Port Neches-Groves Indians were slowed down only in the third quarter, scoring 17 in each of the other three to top the visiting Sabine Pass Sharks 58-40 on Monday in a coaching matchup of brothers — PNG’s Chris Smith and Sabine Pass’ Chad Bryan.

Griffin Stein led the Indians with 18 points. Kenneth Muller scored the next most with 13 and Jett Davis scored 11. Khiamauri Lawson scored the most for the Sharks with 14 points and Grayson Johnson put up 11.

The Nederland Bulldogs stepped up on defense in the second half, outscoring the Lumberton Raiders by 23 to beat the Raiders at Nederland High School on Monday.

Nederland (3-0) will enjoy the rest of the Thanksgiving Week before hosting Crosby at 7 p.m. Tuesday, Dec. 3.

The Memorial Titans showed off their talented team to the Silsbee Tigers on Saturday, defeating the Tigers ion their home court.

The Indians made a short trip to defeat the Tekoa Academy Cougars on Saturday. Both teams had high-scoring fourth quarters — PNG scored 24 points and Tekoa 23 — but the Indians had consistently high numbers the previous quarters as well, while the Cougars were kept below 10 in the second and third.

Brady Nail had a good night for his first game of the season, scoring 16 points, followed by 12 from Grant Pearson and 11 each from Jackson Simmons and Kenneth Muller. Jailan Ardoin put up the biggest numbers for the Sharks with 29 points, while Johnathan Richard added 12 and Kaleab Broussard made seven.

The Sharks (1-2) will head to Houston for the Texas Jamboree Tournament beginning Friday, Nov. 29, and the Indians’ next game was against Sabine Pass on Monday.

The Bulldogs trailed by eight in the first quarter but picked up steam the rest of the game while holding the Bridge City Cardinals back to win with just a five point difference Saturday at Nederland High School.

The Bulldogs’ Joey Hebert led with 15 points followed by Tyler Jackson with 13. The Austin Richardson put up 25 on the board for the Cardinals.

Nederland’s next game was at home against Lumberton on Monday.

The Sharks lost to Galveston O’Connell after hosting the Buccaneers on Friday.

James made the most of the Sharks’ points with 31, while Lawson added 13 and Grayson Johnson added seven.

The Sharks’ next game was against the PNG Indians on Monday.

The Sabine Pass Sharks’ defense shut down the Galveston O’Connell Buccaneers, trouncing them on Friday at Sabine Pass High School.

Yainn Zuniga was the Sharks’ best scorer Friday with 20 with Nevaeh Jones just one behind with 19. Charnel Jones scored 14 as well.

The PNG Indians did better scoring in the latter three quarters after only scoring five in the first but couldn’t keep up with the Orangefield Bobcats on Friday in Orangefield.

Monte Barrow said something that could have been felt by probably every coach and player at Memorial, Nederland and Port... read more