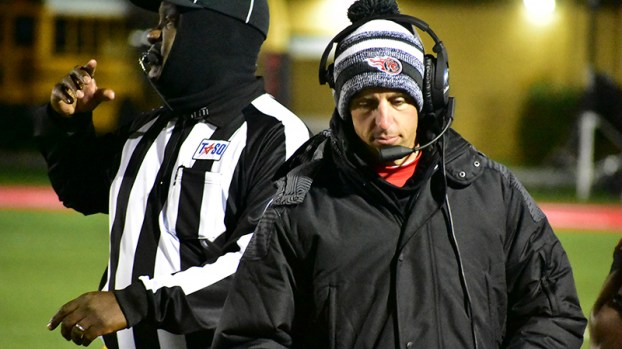 Monte Barrow said something that could have been felt by probably every coach and player at Memorial, Nederland and Port Neches-Groves high schools last Thursday and Friday.

“Unless you’re one of the few fortunate, you’re going to lose your last game,” the Nederland head football coach said. “You go over the whole season in your mind over the weekend and then energize your batteries and start on next year.”

All three teams lost their first playoff games the previous week, and the coaches have had time to reflect the following week on the season and the end of football.

“Obviously I’m disappointed we’re not still playing but I think every season you’ve got to try to learn what you did wrong and not make the same mistakes again,” Memorial head coach Brian Morgan said.

Regardless of the seasons’ outcomes, the coaches know what’s important to take away from each year and what’s especially important for the players.

“We always take away all the fun times,” head coach Brandon Faircloth said. “We take away the victories and the incredible games that we played in and came out ahead. Those are the memories that our team will take with them.”

The coaches shared some of their perspectives with The News on the season and what lies ahead.

Morgan talks to his seniors about what they think could be improved or changed for the next season.

“I think that’s important when you look back on a season to try to learn from the senior class,” he said. “I visit with a bunch of these guys and see their opinions on things, what we could do better.”

It’s no secret the Titans are excited about the amount of talent that will be carried over into next year by the sophomore class. His seniors also all seem to agree: Jah’mar Sanders is the leader the Titans need.

“We think when you’ve got a guy like Jah’mar to build a team around it’s really good,” Morgan said. “For a group of seniors to say that about a sophomore, that says he was doing a pretty good job doing some stuff even in the locker room and on the sidelines that we didn’t even know about.”

Morgan notes the clear improvement the sophomore quarterback had this year as the season continued, as did several other sophomores that played in varsity. There are even a few freshmen he says the coaches have been watching to see if they may be able to contribute to varsity soon.

“They take some lumps when they’re young because they make sophomore mistakes, but when they get to be juniors and seniors they’re very experienced and very calm under pressure,” he said. “Going forward I think everybody knows we’re very excited about the young kids we have.”

Many of those kids are playing other sports. Morgan believes that if his players have success in other sports, it will show in football as well.

“Any time you can have guys that can run fast, or you’ve got a sophomore quarterback that has a chance to play varsity basketball on a really good team, I think in the long run that’s going to improve us as a football team from a leadership standpoint,” he said.

Morgan knows, though, that each year’s team is different. His senior class this year had a different vibe from the previous year, he said. The team made a lot of progress this past year getting control of personal fouls and issues off the field.

“I thought we made a lot of progress with this class,” he said. “On the field and off the field discipline was 100 times better. We spent a lot of time this past offseason on character development.”

The Indians overall made consistent improvement across the season, Faircloth said.

“I think we improved every week,” he said. “I think we played our best football at the end of the year and that’s always our goal. You don’t want to be your best team in Week 2. In Weeks 8, 9, 10 and 11 I thought we played some really, really good football.”

For Faircloth and the Indians, improvement is a constant learning process and a constant drive to make adjustments.

“You’re always looking for ways to get better,” he said. “We’re not ever going to be a program that says ‘Well that’s always the way we’ve done it.’ We’re always looking at every aspect — defense, offense, special teams, weight room, track, we’re always learning and making sure we’re on the forefront of change. If there’s a better way to do it then we’re going to go try and find it. That’s our philosophy: We’re always trying to get better and making sure we’re pushing ahead.”

For some players that meant taking on roles they may not have anticipated. Injuries forced some of the adjustments Faircloth had to make over the season.

“We were spotty with guys on the offensive line because of injuries, and we had some guys step up and did a good job,” he said.

One thing that will stay the same: The Indians will continue to do what brings them the most success — working hard.

“I think we’ve got a good group of young guys coming back,” Faircloth said. “All we know how to do around here is work hard, so we go back to work, put the work in and make sure to put our best team out there in the first game of the season.”

For the seniors, Faircloth hopes they keep not just the scores and wins, but the relationships they built with their teammates.

“We had a close senior class and a great junior class,” he said. “They came together, played hard and played together. It was really fun to watch every week, just how much they cared and how hard they worked to reach their goals.

“I was just proud of our continuing improvement in all three phases. It doesn’t always happen that way but this year it seemed we played our best ball at the end of the year and that’s definitely always our goal.”

Barrow wanted to note that two of the teams the Bulldogs lost to during the season went on to the second round of the playoffs last week.

“Crosby, who we lost to in overtime, put up 70 on Willowridge,” he said. “I was like ‘Wow, 70 points that’s pretty good.’ Our non-district schedule was what we wanted it to be as far as getting us ready for district.”

Nederland also suffered from early injuries that sidelined some players Barrow and his coaches thought would be key parts of their team.

“I hated it for them more than anything, especially Jack Laughlin being a senior, Kade Scott’s a junior so he has another year. Kade went out and we had a guy as full back that had been a receiver for his whole career. He jumped into that role and did some good things for us.

“You always know something unexpected is going to happen during the season, and you hope those kids step up to the plate and I think that’s what they did.”

There’s little point in dwelling on hypotheticals and missed opportunities though, he says.

“You can always look back and say ‘I wish we had done this,’” he said. “I never heard anybody say ‘Well if we would have had him.’”

What’s important is taking the lessons from the previous season and bringing them into the next season, recognizing that no two seasons are going to be alike.

“You’re developing leaders and expectations of those leaders,” Barrow said. “You can’t just assume just because you had it one year you’re going to have it the next, or just because a guy played it this way one year he’s going to play it the same way in the next without working hard. Those things, as coaches, we’re keeping in front of our kids from January to when the season starts in August. That’s when you’re really teaching and hopefully getting across to young men what you want to get across to them during a football season.”

And some of those things Barrow hopes his players learn?

“It’s focusing on things you’ll want to talk about together 10, 20 years from now,” he said. “All everybody sees is the 10 weeks and 10 games you have. We’re with those guys a lot longer than that. We’re with them more off the field rather than on the playing field, whether it be practice or video or weight room, there’s probably a lot more we take with us from the team away from the playing field than there was on the field.”

There are some mixed feelings when, as a senior, one faces the prospect that the next snap on the football... read more