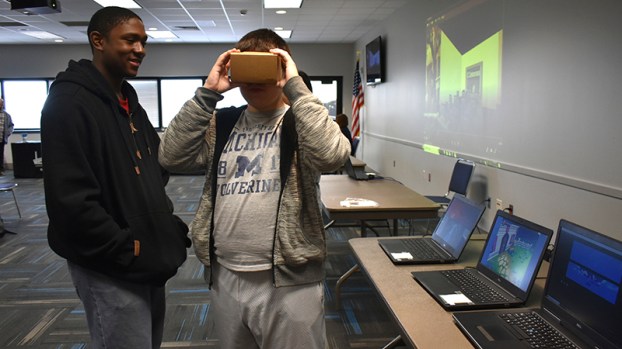 Demario Morrow, left, and Andrew Kapp and of West Orange-Stark High School check out the Virtual reality goggles during the Game Design Showcase at LSCPA on Thursday. (Mary Meaux/The News)

The future of video gaming gathered in an upstairs room at the Carl Parker Center, where superheroes and villains moved about in their respective universes and characters collected coins.

LSCPA student Kevin Tucker created “Joker’s Escape,” which had quite a draw from gamers. 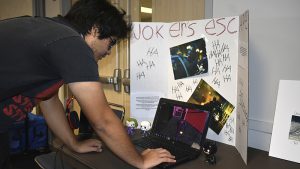 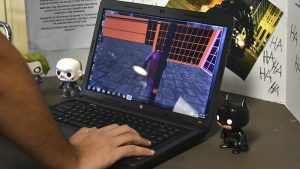 Bennett stopped in to check out other games, including one his friend Collin Broussard created called Project Mighty.

Broussard said the game is pretty simple, the game area is an arena and there are coins scattered to be collected. He said he had some other ideas for the game such as adding health bars but there was a time limit to the project.

“It’s similar to movie making,” Broussard said of game creation. “The only thing is the one playing the game is the main character and you see first hand their triumphs and defeat.” 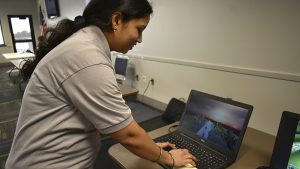 While he loves movies, he sees gaming as another branch, an art form, as it takes a lot of creativity and passion.

Over at Jumping Jack, a game created by Medhekar, Andrew Kapp and Demario Morrow of West Orange-Stark High School took turns trying on the virtual reality headset. Both high schoolers are interested in game creation and playing video games and hope to enroll in the course in the future.

Instructor Medhekar has a master’s degree in computer science from Lamar University and took a gaming class and enjoyed it.

Her husband, she said, is supportive and she even has help from her son. 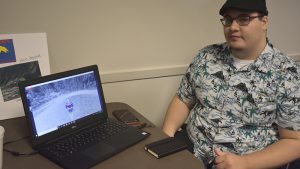 For more information on the software developer/game design course, call 409-984-6390.