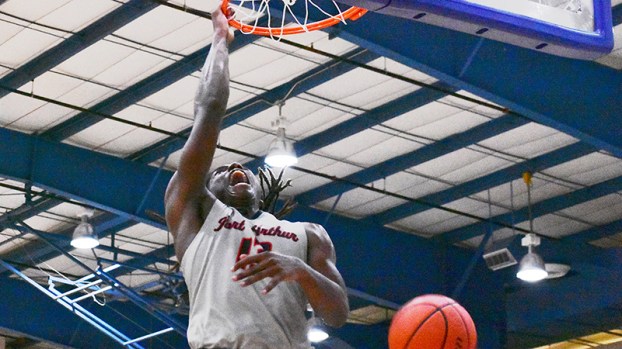 Nate Clover of Memorial throws down a one-handed dunk late in the first half against West Brook in Beaumont. (I.C. Murrell/The News)

The Memorial Titans followed Saturday’s 83-52 win against Westbury Christian in Houston with a 46-44 victory against West Brook in Beaumont on Tuesday.

West Brook’s lead scorer was Ja’Quan Yates with 11 points, and behind him Joseph Lucien with 10.

Memorial will go to Silsbee for a game that was rescheduled for Saturday at noon.

In Nederland, the host Bulldogs kept a consistent intensity, outscoring Kelly Catholic by 65 points on Tuesday and marking a win for the first game their season.

Nederland will play Bridge City at home on Saturday at 6 p.m.

In Little Cypress, Noah Marchak led the Port Neches-Groves Indians to a 55-50 win against the Little Cypress-Mauriceville Bears on Tuesday, giving Chris Smith his first victory as head coach.

PNG will host a Saturday game against Tekoa Academy at 5 p.m.

The Sabine Pass Sharks improved to 1-1 after their defeat to Bob Hope with a 60-51 win against Lighthouse Baptist Academy on Tuesday.

Harold James was the Sharks’ top scorer with 19 points and led in assists with four. Khiamauri Lawson scored 15 points along with one assist and two steals. Jeremy Fontenette put nine points on the board off of three 3-point baskets, in addition to eight rebounds, two steals and an assist.

The Sharks will play at PNG at noon on Monday.

The Tekoa Cougars (1-1) lost their second outing of the season against West Hardin 88-55.

Jailan Ardoin continued to lead the Cougars with 33 points and 12 rebounds, four assists and a steal. Kaleab Broussard followed Ardoin with 13 points, five assists and two steals, while Jonathan Richards led in rebounds and steals for the Cougars with six each, along with five points.

Tekoa, which started the season with a 64-54 win over School of the Woods behind Ardoin’s 39 points and 22 rebounds, will head to PNG to play the Indians at 5 p.m. on Saturday.

The Bob Hope Eagles left Anahuac with a 62-49 loss on Tuesday.

The Eagles started strong in the first period outscoring the Panthers by six but were held back the rest of the game getting no more than 10 the next three periods.

The Eagles head into Louisiana to play Hackberry at 6 p.m. on Friday.

Both the Sabine Pass Sharks (2-0) and the Colmesneil Bulldogs started slow in the first half, but the Sharks hit their stride in the second to defeat the Bulldogs 46-27 on Tuesday.

Charnel Jones and Yainn Zuniga lead the Sharks in scoring with 19 points and 15 points respectively.

The Sharks will host Galveston O’Connell on Friday at 6 p.m.

The Memorial Lady Titans (0-4) so far against Silsbee 65-30 on Tuesday. The Titans were kept below 11 points each period and started slow in the first, scoring only three points.

Maya Flax was the Titans’ top scorer with 10 points, while Silsbee’s Kaniesha Brydson lead the game with 19.

The Lady Titans travel to play in the Fort Bend Tournament Thursday through Saturday, then travel again to Hardin-Jefferson for a 6:45 game on Monday.

It’s been a journey for seniors Alex Ned and Jatavian Neal. Their high school football careers with the Memorial Titans... read more