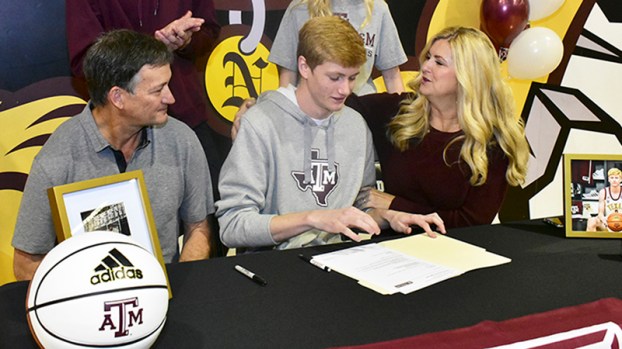 Hayden Hefner, seated in center, receives a hug from his mother Julie as his father Chip looks on Wednesday during Hayden’s signing ceremony at Nederland High School. (I.C. Murrell/The News) 11-20-19

NEDERLAND — Fourth-year varsity standout Hayden Hefner sat out of a Nederland basketball game for the first time in his career Tuesday. He described his feeling as not good.

“That’s the hardest thing I ever had to do, sit through that game,” the reigning District 21-5A offensive player of the year said.

The morning following Nederland’s 102-37 season-opening thumping of Kelly Catholic, Hefner still commanded attention on the Dog Dome court — with family and friends supporting him as he signed his letter-of-intent with Texas A&M.

“After I had met with Coach Buzz [Williams, the first-year A&M head coach] and all of his staff, it really felt like a home for me and somewhere I really wanted to go and really put in the work,” Hefner said.

Hefner underwent arthroscopic surgery on his right meniscus two weeks ago and expects to return by mid-December. He doesn’t know how or when he sustained the injury, just noticing the knee had become more sore.

“I’ve been dying for it,” Hefner said about his pending return.

The ongoing therapy, Hefner believes, will help the 6-foot-5 multi-positional threat become a stronger player for this season and when he arrives in College Station for next season.

“I think it’s going to be a blessing in disguise for us,” Bulldogs coach Brian English said. “Some of our kids have really grown, and we’re just going to add him to the mix, and hopefully we’ll be much better for it.
Even Port Neches-Groves coach Chris Smith — who was Hefner’s coach at Central Middle School and assistant at Nederland High until this past May — returned to the Dog Dome for the signing.

“I watched him since he was 8 years old,” Smith said. “I wouldn’t miss this for the world.”

Come Jan. 7 and Jan. 31, Smith will have to gameplan against his former protégé, who averaged 22 points, 6.2 rebounds and 4.4 assists last season.

“I know that kid and how good he is and how hard it will be to stop him,” Smith said. “We’re going to try to put something together.”

A&M is 2-1 this season following wins over Northwestern State and Louisiana-Monroe and a 30-point loss to eighth-ranked Gonzaga.

Hefner believes he’ll be able to adapt to Williams’ style of play.

“His style is definitely, anybody can do anything,” he said. “If somebody brings the ball up, they can take it up and run the offense, it doesn’t matter who it is. That fits me well. I can do, literally, anything you ask me to.”

Both Zane Hernandez and Santiago Agudelo gave, independently, the same advice to upcoming underclassmen: Don’t take anything for granted. “Give... read more