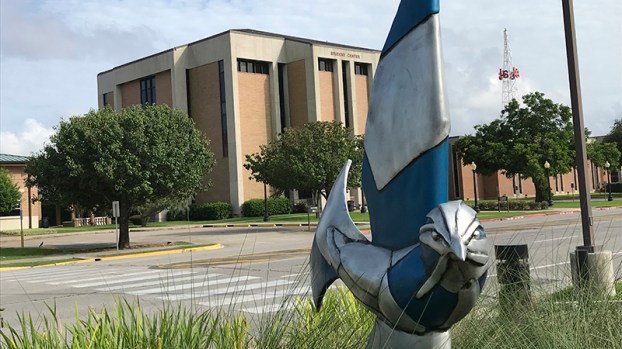 Reportable crime on Lamar State College Port Arthur’s campus is rare — maybe a broken window or a shoplifting at the campus bookstore.

The low level of crime is something campus leaders take pride in and were all the more shocked when two students were held at gunpoint in the Performing Arts Center parking lot at 7:23 p.m. Friday and a Chrysler 300 stolen.

Port Arthur police said neither victim was injured and the vehicle was recovered a short distance away from the offense location. There are at least two suspects described as black males in their early 20s.

PAPD Chief Tim Duriso said there were officers close to the area when the call went out, possibly the reason the car was found within a mile of the campus.

“There’s not many outlets in the area. They can’t go into the water so there’s only a few directions they can go and it’s not going to be toward the police station,” Duriso said.

Gerry Dickert, public information coordinator for LSCPA, said when they learned of the crime school officials sent out an email to students expressing the need to be careful in the parking lots.

“We offer escorts with security,” Dickert said of the four employees in the security office. “We will walk people to their cars if they ask.”

The campus is spread over several blocks with some parking on Procter Street and Lakeshore Drive and other areas with parking lots.

“We cruise the campus already and have stepped up the patrols, moving around parking lots constantly,” he said. “The police have also picked up their coverage of our campus, as well, and a lot of time will sit in our parking lot to do their reports. The thing that is most important to understand, I’ve been here 8 1/2 years and this is the first reportable offense since I’ve been here.”

The campus, like others, is required to submit an annual crime report to the Department of Education. That info can be found on a link at the bottom of the LSCPA website.

The carjacking happened over a span of 5 minutes, Dickert said, adding the college is doing absolutely everything it can do to make sure the facility and all people are safe.

“It makes you shake your head when people perpetuate the myth that Port Arthur is not safe,” Dickert said. “This campus is as secure as any around and more so if you look at reports from surrounding campuses of higher education. You will find we are safe. It’s something we really pride ourselves on.”

Duriso said security from his department has been tight at the campus since the carjacking and officers are continuing to investigate the crime.

Federal charges may be filed on three people arrested on gun charges after a Port Arthur traffic stop. Those arrested... read more