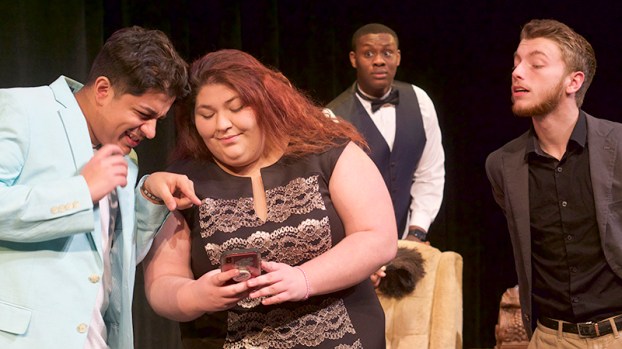 The stage is dark. The curtains closed. A soft piano tune wilts through the performing arts center at Lamar State College Port Arthur as actors can be heard scuffling behind backstage.

Eventually, a single light shines as the curtains are drawn back and a young man appears. The setting is old London.

“Did you hear what I was playing, Lane?”

The first line of Oscar Wilde’s famous play “The Importance of Being Earnest” rings from Dalton Teeler’s lips — the stage is set. 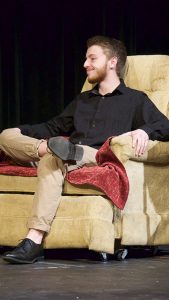 “’The Importance of Being Earnest” is a play about two young men who fall in love with two young women who have an attraction to the name Ernest,” she said. “The sad thing is, is neither one of them is actually Ernest.”

The play is a farcical comedy set in Europe that follows the lives, lies and lusts of a small group as they navigate through relationships, expectations and the pressure of society.

The plot follows protagonist Jack Worthing, a billionaire playboy who leads a double life as the fictitious Ernest. Alongside him, his best friend Algernon Moncrieff is the secondary hero, a young charming bachelor. Algernon also has a fabricated friend ‘Bunbury’ who he uses to reprieve him of his real life.

Christian Montoya, who plays Jack, aka “Ernest,” has been acting for eight years and said his role as a rich playboy billionaire in an old time setting has been a challenge. 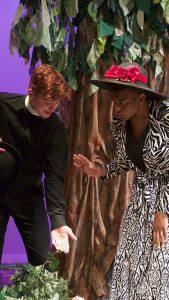 “(Ernest) is a very rich dude,” he said. “He lives in Europe and he doesn’t like who he is, so he made up this other character called ‘Ernest.’ Wherever I live, I take on this persona of Ernest to do whatever I want and nobody will know who I am. Whenever I come back I have to take care of my ward and that’s when I take on who I really am as Jack. My character is just really trying to find love.”

The duo plunges into an adventure from Act I as they vie for the hand of each of their maidens, Gwendolen Fairfax and Cecily Cardew.

“It’s all about mistaken identity and confusion of identity in relationships,” Stafford said. “Will the issues of identity get resolved? That’s the big suspense by the end of the play. Will the girls break up with them or will they agree to marry them?”

LSCPA theater team brings a 21st century spin to the 1895 script by adding the use of cellphones, blogs and social media to convey the ties to today’s societal issues. 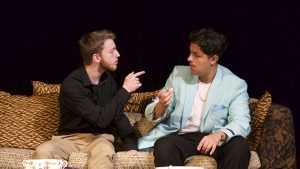 “I chose the play because it just seemed real appropriate at this point in time to do a nice lighthearted comedy and make a comment on society as well,” Stafford said.

The challenge? Students were confined to only class days for rehearsals, academics and set design to learn a three-part production.

“The set, especially in the second act, the students built the greenery and the garden,” Stafford said. “I was very pleased with all the work they’ve done but it’s the time constraint that’s the real push.”

Stafford said she is starting to train the students on the real schedule of professional actors, a lesson that starts with time management.

“We treated it like a union show,” she said. “We haven’t had any late night rehearsals. We’ve worked within our class time. We’re learning time management and getting everything done. In professional theater you only have about two weeks of 12-hour days. We’re really trying to give students an experience they can take with them into the professional world. That’s our new direction in the program is going to be — hands on, on-stage experience.”

Stafford said she wants to welcome the entire community to come see the play and support the student’s hard work.

“Oscar Wilde has a very lighthearted, comic, family evening feel,” she said. “The wittiness and the humor is what the community is going to enjoy.”

Performances are Friday and Saturday at 6:30 p.m. Doors open at 6 p.m. Tickets are $5 for senior citizens, Lamar State students and staff are free with I.D. General public is $7.

Learning science from textbooks is one thing, but getting to demonstrate science is another. JASON Learning is helping elementary and... read more