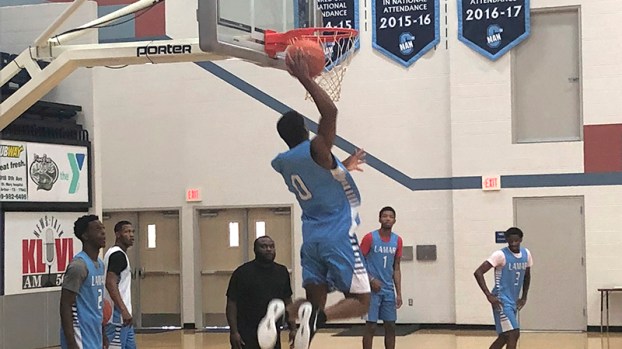 The Lamar State Seahawks are getting ready to play their first conference game on Saturday against Tyler Junior College. They believe their early season schedule, in which they played several nationally-ranked teams, prepared them to begin conference play, though there’s still a little ways to go.

“It could be going better,” sophomore and Memorial graduate Jamyus Jones said. “We’re trying to get it together. Get better. We had two kind of slow games that were losses, but we’re picking it up now and starting to be better.”

Two losses in particular came against some tough opponents, and the Seahawks definitely had the chance to take home a win in both. The Seahawks played Clarendon College in the Texas East vs. West Challenge and lost to the Bulldogs 84-80.

Against South Plains College, a missed free throw with 10 seconds left allowed the Texans to make one more bucket to beat the Seahawks by one, 66-65.

Free throws are one of the things Madison says the team needs to work on.

“Right now it’s still execution, going over offense and knowing all of our plays,” he said. “Defensively, we’re working on our rotation, just making better decisions with the ball, valuing the ball, valuing possessions and free throws. It comes down to free throws, we’ve got to improve at the free throw line.”

Better honed skills, and especially better teamwork, will be what the Seahawks can use against Region XIV teams going forward. Many of these teams are taller than Madison’s players, he said, but Lamar State recruits based on I.Q., skill sets, ability to be coached and, most of all, the ability to work as a team.

“We’ve always preached that team chemistry is more important than team talent and we like our bunch,” he said. “We’re working hard and have good chemistry. We’re going to have to overcome some of the athleticism and height with teamwork.”

Jones agrees that as a team the Seahawks need to come together, and if they do they could go pretty far.

The first step will be to beat Tyler. Madison says the Apaches have length and athleticism on their side.

“They play a 2-3 matchup zone that sometimes if you over penetrate in the middle of that zone it can be hard to pass because of their length,” he said. “They’re explosive, athletic, they can dunk the ball and they’re very quick getting up and down the court.

“There’s always a good rivalry between us and Tyler. It always goes down to the last possession, and if we play to our potential we’ll have an opportunity to win the game.”

Port Neches-Groves exes Chris Stroud and Andrew Landry continue to go in different directions on the fall portion of the... read more