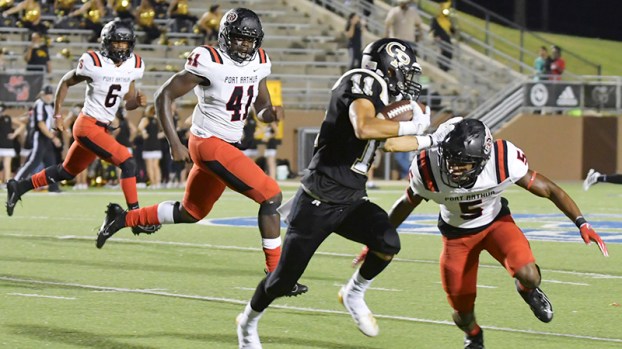 Jatavian Neal (5) of Memorial closes in for a tackle against Galena Park on Sept. 29. (Jereem Augustine/Special to The News)

It’s been a journey for seniors Alex Ned and Jatavian Neal.

Their high school football careers with the Memorial Titans are ending, and while it would have been nice to play more football, there are still good feelings in the field house about the team and its accomplishments this year.

“It feels good, and we’re ending off not really on a good note, but it’s still a blessing to be able to play football everyday with my teammates and talk to all of my coaches,” Neal said. “It’s my dream sport, it’s my favorite sport and it’s what I like to do every day.”

Head coach Brian Morgan said the coaches enjoyed “a great group of seniors” who really bought in and did everything asked of them.

“They really learned some mistakes that were made by the senior class that was before them and really tried to correct them,”Morgan said. “They were great to work with, great kids and a lot of them have really bright futures on and off the field. I hate it for them that they’re not still playing, but it ends for all of us sooner or later.”

Beyond just the nuts and bolts of football, Neal and Ned say the coaches, their teammates and their experiences playing football taught them life lessons on discipline and the keys to success.

Those lessons included how to pick one’s battles, how to take things in stride and how to let go of anger.

“The coaches taught us don’t always fight back. Sometimes you just have to take it and leave, let it go in one ear and out the other ear,” Ned said. “You’ve just got to listen and move on.”

Though it’s his favorite sport, Ned isn’t only playing football. He’s also playing basketball, and both seniors will be running track. There are skills and levels of athleticism the two say they can take with them from football into these other endeavors.

“Basketball is a physical sport also,” Ned said. “It’s not as physical, but we can take some of that physicality we got from football and take it to basketball and track.”

“I’m preparing for the track season, working out every day trying to get faster and stronger and hopefully get to go to State,” Neal said. “Our main goal is going to State. That’s what we’re striving for and that’s what our coaches are pushing us to do.”

After high school, both want to attend a four-year college. It’s Ned’s dream to go to LSU, where he would study chemical engineering. Otherwise, Ned would be open to going to Duke, Texas or Georgetown.

Neal’s choice would be Oklahoma State, where he would enter a mechanical engineering program. His alternatives are Texas A&M and Texas State.

“I want to go to a four year college, it doesn’t matter what college I go to, just whatever college has my best interest and everything I like that applies to my major,” Neal said. “I want to be a mechanical engineer, so I want to be in an engineering field.”

For next year’s team, Neal and Ned have some words of wisdom.

“Make sure you enjoy your high school career, period,” Neal said. “At the high school, nothing’s guaranteed so you have to stay blessed up and just pray everything will be all right, and from that you should be OK.”

Junior Josh Mazyck was in rare form, not just last Thursday but the whole week. “He was running hard, and... read more