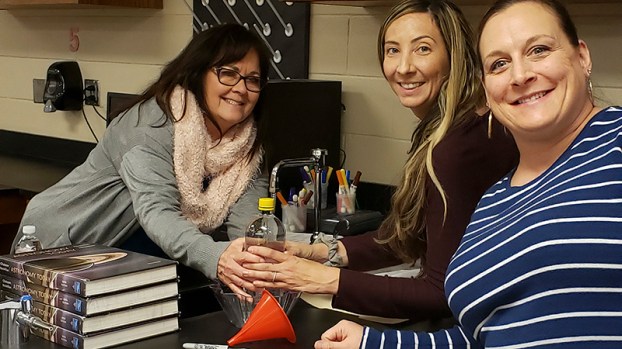 Learning science from textbooks is one thing, but getting to demonstrate science is another.

“Definitely one of the big things is the STEM aspect, because there are a lot of opportunities to incorporate that in classroom learning,” said Dennis Johnson, a fifth-grade science teacher at Port Acres Elementary. “As a science teacher, that’s the ultimate thing you want to do because there are so many intricate things that go into learning. Careers you wouldn’t think of, students can see that. They can see, actually, this is a real person [doing a job in STEM].”

PAISD science teachers in grades 3-8 underwent two days of training last week in JASON Learning, a program founded in 1989 by oceanography professor Bob Ballard, who’s best known for discovering the Titanic in 1985. The teachers were trained at Memorial High School on how to conduct science labs, focusing on force motion energy, Earth and space.

“Scientists from different areas of science do excursions with students and base curriculum on the field experiences and careers,” said L’Tunya Bernard, PAISD elementary science supervisor.

The JASON Learning curriculum for the district has not yet been determined, Bernard said, but teachers have been working on the curriculum “Tectonic Fury: Unlocking Earth’s Geologic Mysteries.”

PAISD students studied climatology through “Seas of Change” and physical science through “World of Waves” the past two years.

“Our area is really flat, so our students need vicarious experiences,” Bernard said.

At times, actual scientists in the STEM fields do live broadcasts with students via the Internet, Bernard said. A live broadcast will be conducted with JASON teachers and their students in January at Lamar University.

“That’s a broadcast with students every year, so they take those students and create a video and present it to the children,” Bernard said.

One project Johnson is working with his students on involves pouring vinegar on limestone to study effects of weathering and the water cycle. Vinegar makes limestone break down into smaller parts.

“In my teachings, there’s a piece of that curriculum I pull in,” he said. “We’re about to work on Earth and space, so I like some of the videos and background information that JASON gives you. … My students, they will have a log-in for that program.”

The project also helps Johnson conduct what he calls a “flipped classroom” — having students perform activities at home and log-in with him so he can see how much they completed.

“If I have a higher student, I can give them something a little more challenging as opposed to a student who’s not quite at that level, who I can help catch up to that level,” Johnson said.