Walk-On’s Bistreaux & Bar boasts a “the surf and turf burger of your dreams.” (Courtesy photo)

C.O. Vallet and his wife Cindy knew they had a great product with plenty of prospects for expansion into Southeast Texas.

The question was just where to locate.

The couple, who live in Orange, own the hugely successful Walk-On’s Bistreaux & Bar in Lake Charles, La.

That’s great news for local families and sports fans, but also something special for Cindy, a Port Arthur native and 1972 graduate of Thomas Jefferson High School.

“I’m very excited and very thankful (C.O.) decided against Beaumont and moved it to Port Arthur. It did not take a lot of convincing,” she said. 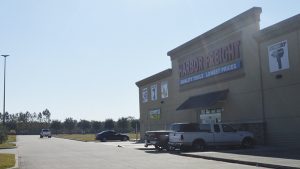 C.O. and Cindy Vallet are looking to break ground on Walk-On’s next month, with a six-month construction process expected, weather permitting.

The 11,000-square-feet, single story sports bar will include outside patio seating, approximately 100 televisions and 140 employees. It will be located on Jimmy Johnson Boulevard next to Harbor Freight.

C.O. Vallet said the land footprint is approximately four acres and construction will include a new strip mall and parking lot.

“I think it is going to do very well in Port Arthur, because you have nothing like Walk-On’s,” C.O. said. “There is a need for something like this, and I’m excited to bring it to my wife’s hometown. Port Arthur and Mid-County is a great area. The way Port Arthur is growing; it’s going to be your next boomtown. We’re excited to be on the ground floor of this.” 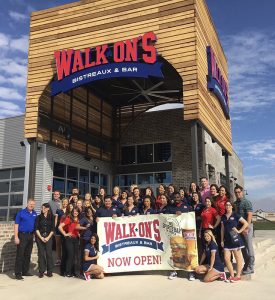 The first Walk-On’s Bistreaux & Bar to open in Texas was Lubbock in 2016. (Courtesy photo)

Following a launch in Baton Rouge, La., in 2003, Walk-On’s has expanded to include dozens of locations across Louisiana, Alabama, Mississippi, North Carolina, Florida and Texas.

The success of franchise owners like C.O. Vallet have helped take the brand nationwide.

C.O. said his franchise location in Lake Charles became the company’s first in 2015.

“It’s exceeded my expectations,” he said. “There are 32 stores right now, and I’ve been No. 1 in gross sales for the last four years, since day one.”

Investigators are working to find the cause of a fire that destroyed a vacant home at the corner of West... read more