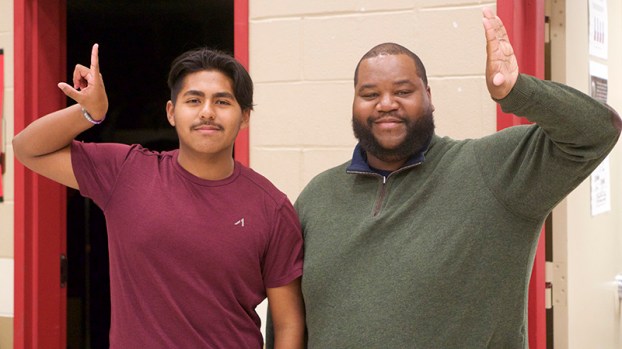 Memorial High School senior Joaquin Sanchez, left, and band director Alex Frazier, right, helped form the Port Arthur Chapter of Omega Lamplighters. The organization focuses on turning young men into great men as they learn to volunteer, give back and be a role model in their community. (Cassandra Jenkins/The News)

BRIGHT FUTURES — Memorial senior Joaquin Sanchez leads others to give back

Joaquin Sanchez lives by one motto every day: Don’t stray from the path that you set for yourself.

The Memorial High School senior said his biggest role model in life is his mother, Gloria, who has taught him the value of hard work, helping others and setting strong goals.

“My mom always stays on top of me about my grades and being active,” he said. “She always makes sure that I’m staying on the right path. At the end of the day, I’m walking this path. I can’t divert from it. I have a set plan and although it may not always work out that way, I know where I want to be and how to get there.”

The Houston native is a part of the National Honor Society, top 10 percent of his class and co-enrolled at Lamar State College Port Arthur.

“Grades are a really important thing with not only myself, but in my household,” he said. “I just got to make sure that as soon as I get something, I do it. That’s the only proper way I can really get it done, because if I wait too long I get backed up and I can’t work with that.”

Sanchez is also a member of the band and a part of the pilot program in Port Arthur called the Omega Lamplighters. 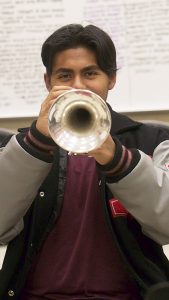 “First and foremost, I’m in the band,” he said. “I play the trumpet. I’ve been playing since fifth grade. I really just thought music was a good thing to get into. I tried it out and have really fallen in love with it. I tend to spend most of my time with the band because I put a lot of my effort into it.”

“Omega Lamplighters is a young men’s group where we really try to give back into the community and try to uplift ourselves by turning young men into grown men,” he said. “I thought it would be a good thing to be a part of something from the beginning and see how it will grow after I leave.”

Sanchez was also voted yearbook editor by his peers.

“My job is to make sure that everything looks cohesive and natural and everybody is on the same page,” he said. “I like going around and being open to help with anything. I may not know everything but I try my best to give a helping hand whenever I can.

Assistant Principal Trent Johnson said Sanchez is one of the most humble and confident students he’s had the pleasure of knowing.

“Sanchez has shown that he has been highly capable of being a positive role model in his community and in school,” he said. “He has volunteered at the Hospitality Center serving food to the needy, serving the youth at Adams Elementary and serving as a volunteer for the Gift of Life Breast Cancer Awareness 5K run in Beaumont.

“Joaquin Sanchez is a great student and his future is bright. I look forward to the impact and imprint he is going to make in our society.”

Sanchez plans to spend more time volunteering and is hoping to make it to the state level for all-region band and solo and ensemble before graduating.

Upon graduation, Sanchez intends to enroll at the University of North Texas for kinesiology and exercise science.

“A quote that we use in the Omega Lamplighters is ‘Turning good young men into great young men, it takes a village,’” he said. “It’s a very true saying. I wouldn’t be where I’m at without all the people who have helped me in my life and continue to guide me now and in the future.”

C.O. Vallet and his wife Cindy knew they had a great product with plenty of prospects for expansion into Southeast... read more