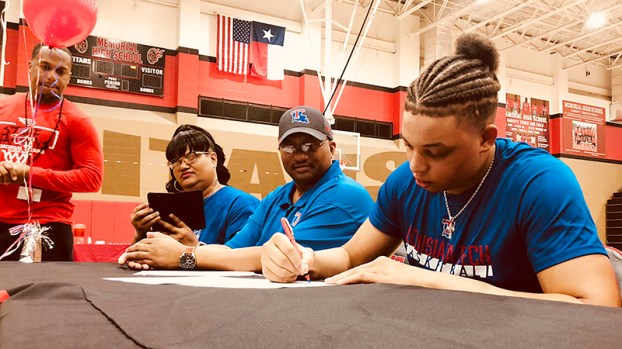 There was a theme among the words said in honor of Memorial Titans forward Kenneth Lofton Jr. by former coaches, teachers and well-wishers on Friday in the Memorial High School gym.

Lofton was surrounded by loved ones as he signed his letter of intent to play basketball for four years at Louisiana Tech University after he graduates in 2020. One point everyone seemed to agree on: Lofton sure didn’t make it easy for his teachers and coaches. That point, though, was made with a lot of love.

“I’ve had the opportunity to coach Kenneth Lofton Jr. for a couple of years,” Memorial head basketball coach Alden Lewis said. “I’ve been knowing him since he was small. Let me tell you: He wasn’t always the easiest. As of today, he’s still not the easiest. We go back and forth, but it’s all good, it’s all love. I coach him hard, I love hard and he knows it’s all from a good place.

“I’m proud of him. I want him to continue to do better and better. ‘Each day try for excellence’ is one of our quotes. We’re expecting big things from him.”

Several other coaches who have had the chance to see Lofton grow as a player and person joined in congratulating Lofton. Junior varsity coach Dwight Scypion recalled the times he spent with Lofton both as a coach and as a disciplinarian.

“Junior and I, we’ve had our little run-ins too,” he said. “Junior spent a lot of time when he became a sophomore in my room, which is ISS (in-school suspension), but next school year he was a whole lot better. On the court one thing I can say about him is he’s very serious about his game, very serious about his work.

Former Memorial coach Antonio Cooper coached Lofton for several years, and he stressed that there’s no better feeling among coaches than when one of their players makes it to college.

“Pretty much everybody is going to say the same thing — they’ve had their times with Junior,” Cooper said. “It’s been a rocky road but we all know at the end of the tunnel is always a light.

“We appreciate all you guys that have helped groom Junior into the man he is today. We still have a little ways to go, but at the end of the day, we still want this guy to get an education and graduate from college, not just go there and play basketball. You can’t take it for granted because not everybody gets the opportunity. So whenever you do get the opportunity, seize the moment and finish college.”

Lewis had spoken similarly about the people who helped guide Lofton.

“I want everybody to know it really takes a village,” he said. “It’s not an easy task. Sometimes he’s a very difficult kid to deal with, but he’s a joy to be around. He may be distracted but one thing I do know: He brings it every night on the court. 99 percent of the time he comes to play, and that’s without a shadow of a doubt.”

Assistant varsity coach Curtis Bason clarified where he and the others were coming from regarding Lofton.

Lofton himself acknowledged the gratitude he felt for the help everyone has given him.

“I thank everybody that came, family friends and coaches,” he said. “I’m just thankful for this moment, and God bless us.”

Titans center Nate Clover had also previously announced that he intends to play for Oral Roberts University, though according to Lewis his official signing has been postponed for a later date.

The Port Neches-Groves Indians were outrun by the Lumberton Raiders in their first game at the Lumberton Tip Off Classic... read more