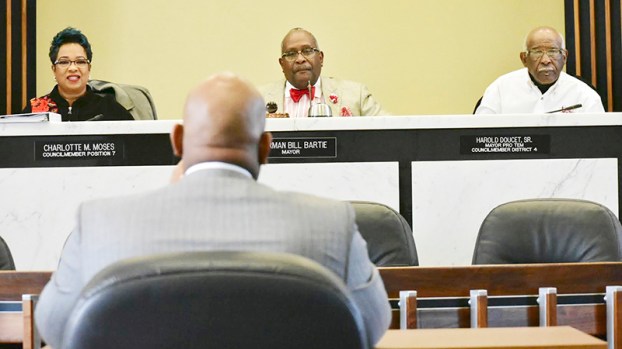 What a difference 79 days can make.

I was sitting in Port Arthur City Council chambers the morning of Aug. 27, when Edward Williams of the Baker Tilly search firm — hired by the city to lead a city manager’s search — explained how long it could be before a permanent one was in place.

Williams said it would, conceivably be, January of 2020 before the new person was on the job.

“Four more months waiting for a permanent city manager after what we’ve been waiting so far — I thought we would have someone in place in 60 days or so,” District 2 City Councilman Cal Jones said at the time.

The public was told this latest search process began in August, with an outline of a desired candidate to include, in part, finding a city manager that is educated, experienced, approachable, detailed, ethical, financially strong and friendly.

Elected leaders feel Burton is all of those things, which is a great thing for Port Arthur residents and local business interests.

Everything the public has been told indicates Burton is the man for the job.

In fact on Wednesday, Mayor Thurman Bartie declared Burton was his man from the start.

Following The Port Arthur News’ publishing the decision for Burton, numerous readers asked why so much money was paid to Baker Tilly to conduct a national search when the right candidate was already in house.

The contract approved in August called for paying Baker Tilly $24,500 to lead the search.

That process seemed to stall slightly in the beginning when a few benchmarks in the search process came and went with little public feedback.

A first review of the candidates was originally due Sept. 30, and then an updated report was expected to be presented to the council on Oct. 14, but neither deadline was met.

At the time, staff from The News reached out to city employees and the search firm but did not receive feedback.

City council members didn’t appear worried, indicating to the public and this newspaper that updates would come in October. They were right about that.

On Oct. 28, the Port Arthur City Council met in an executive session with a representative from the search firm to discuss the candidates.

At first, council members kept the names of candidates confidential. On the same day, Burton told the editor of The News that he had not yet indicated whether he was interested in becoming a candidate for the permanent role — 16 days later he would have the job.

On Oct. 28, Mayor Bartie said the city needed time to study the list of candidates.

“We have to go through it and have a good understanding of how we want to approach it from this point,” Bartie said. “We’re nowhere close to a candidate right now. What we’re close to is coming up with the information each councilperson will study from the list of candidates, which we will see, and then we will come up with a list of, maybe, some quarterfinalists or whatever have you, and then maybe semifinalists and then on to the finalists. It’s a process.”

Things progressed significantly faster than that outline with public interviews and an answer all voted on in just over two weeks.

Feedback with the decision has been near 100 percent positive with very few, if any, publicly suggesting another candidate deserved the position over Burton.

He’s been a dedicated member of the city staff for 11 years and has a master’s in economic development from the University of Southern Mississippi.

We wish him the best. Our city deserves nothing less.

Stephen Hemelt is publisher of The Port Arthur News. He can be reached at 409-721-2445 or stephen.hemelt@panews.com.

Before smart bombs, there were brave pilots who flew through enemy fighters and anti-aircraft fire to deliver their payloads... read more