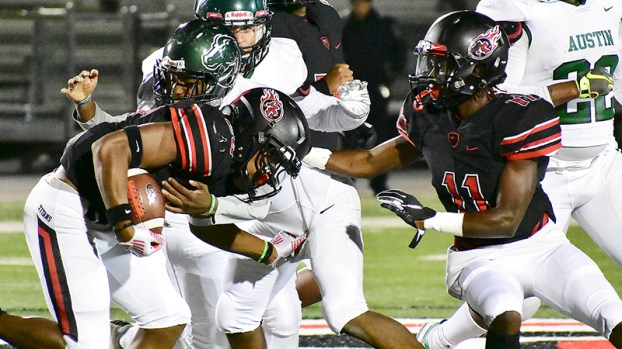 Memorial running back Adrian Hayward totes the football as wide receiver Tyrence Augusta (11) tries to block for him during the Nov. 8 home win against Houston Austin. (I.C. Murrell/The News) 11-8-19

Successes are what build confidence, according to Memorial head coach Brian Morgan.

He wanted his team to make the last home game of the regular season against Houston Austin a good one for the seniors, and there were a lot of things his team did right in that regard last Friday.

“We continued like the week before, we executed well, started off fast, able to score early on,” he said. “We did what we were supposed to, we were supposed to win that game and put them out of reach, and we did and I thought that was good to see.”

Two solid wins in a row, the Titans are feeling confident. That’s good, especially since their first playoff game will be against a team that’s had a whole season of wins to build confidence.

Undefeated Shadow Creek, the District 10-5A-I champion, hosts the Titans at Freedom Field in Rosharon at 7 p.m. tonight. They are coming off a big end-of-regular-season win of their own, shutting out the Terry Rangers (2-8) 63-0. Last year the Sharks made it to the state championships, losing to Highland Park 27-17.

Shadow Creek’s defense is one of the sources of that success. It has allowed only 138.5 yards per game this season and only 73 points. They’ve kept their opponents’ rushing gains to 569 yards, 410 fewer than the next highest in their district, Hightower, and 387 fewer than District 9-5A-I’s leader on defense, Porter.

Memorial has a moderately balanced record of rushing and passing yards, but with the Shadow Creek defensive effectiveness against runs and their high number of interceptions, the Titans will need to continue to execute as they have their last two games.

On offense, Shadow Creek junior Kyrone Drones has a completion rate of 61 percent, completing 122 of 200 throws. He’s second in his district for passing yards with 2,084 and has the most passing touchdowns, 29. That proficiency has gotten the sharks 2,156 total passing yards this season. The offensive power in District 9-5A-I, New Caney, who has gained more yards on rushing, still leads the district in passing yards as well, but has gotten 258 fewer yards than Shadow Creek.

Senior Seth Jones leads the Sharks in receiving yards with 417, off of 25 catches, and junior Greg Hancock has 297 yards on 22 catches of his own. Both players have five touchdown receptions.

Memorial’s top receivers have their own respectable numbers. Senior Tavian Gipson has 391 yards on 36 receptions and senior Alex Ned has 409 on 28 receptions. Sophomore quarterback Jah’Mar Sanders has 184 passes and made 94 completions. Sanders also leads the Titans in rushing yards, 590 on 112 carries. Junior Branden Chaney has seven touchdowns for the Titans, along with 454 total yards on 115 carries.

Morgan knows his own team has playmakers. Keeping that in mind — and staying confident — will see them through their first playoff challenge, he believes.

ROSHARON — Monte Barrow knew that his Nederland Bulldogs had a tough task in their 5A Division II bi-district playoff... read more