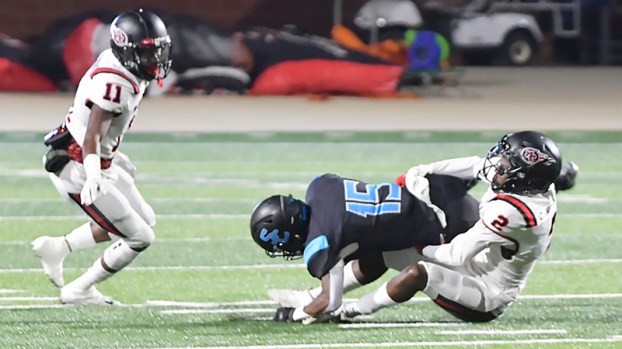 Colton Mitchell (2) of Memorial tackles Jared Jackson of Shadow Creek as Tyrence Augusta (11) gets in on the play Friday night in Rosharon. (Jereem Augustine/Special to The News) 11-15-19

ROSHARON — The Memorial Titans were just the latest victims in the feeding frenzy of the Shadow Creek Sharks, as the Titans were on the short end of a 49-7 score in a 5A Division I bi-district playoff game at Freedom Field on Friday night.

The undefeated Sharks (11-0), who advanced to the state finals last season, racked up 338 yards of offense on the night, 233 of those through the air. The Titans (5-6) had trouble stopping Shadow Creek quarterback Kyron Drones, who threw for four touchdowns and ran in for two scores. Drones was 17-of-28 passing with no interceptions. He also picked up 35 yards on nine carries.

Shadow Creek used a methodical offense to build a 28-0 lead at halftime. The Sharks marched 76 yards on the game’s opening drive, eating 6:40 off the clock, capping the drive on a 1-yard plunge by Drones to make it 7-0. That would be the only scoring of the opening quarter. 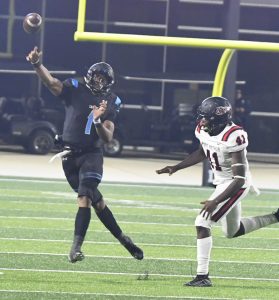 The Titans had 113 yards in the first half, but hurt themselves with three turnovers. Quarterback Jah’mar Sanders lost two fumbles, while wide receiver Alex Ned had his pass on a trick play picked off.

The Memorial defense stiffened in the third quarter, allowing just one score in the period when Drones threw a 23-yard TD pass to Seth Jones.

The Titans sought to change things up late in the third quarter when senior Brian Milton replaced Sanders at QB. Memorial got a momentary boost and broke through onto the scoreboard when Adrian Hayward scored on an 8-yard run to make it 35-7 with 10:43 remaining. Any momentum was swiftly quashed when the Titans failed to recover an onside kick and the Sharks scored a little more than 3 minutes later when Shadow Creek’s Jorge Jones recovered a blocked punt in the end zone to make it 42-7.

Drones closed out the scoring on a 12-yard run with 51 seconds remaining to give the home fans one more thing to cheer about.

The Titans finished with 177 yards of total offense. Sanders was 6-of-12 for 60 yards through the air and had nine carries for 69 yards.

The Titans couldn’t capitalize on their first possession, a drive that stalled in Shadow Creek territory after Memorial held the ball for 4:28. The Titans could sustain any drives after that, with their longest drive of the second quarter eating just 2:11 off the clock.

The offensive game ball goes to Adrian Hayward, who 43 yards and a TD on eight carries for the Titans. Defensively, Jatavian Neal had a sack and put some pressure on Drones throughout the night.

Spring football as the Titans will get ready for the 2020 season. Shadow Creek will take on either Hutto or Seguin in the area round.

Successes are what build confidence, according to Memorial head coach Brian Morgan. He wanted his team to make the last... read more