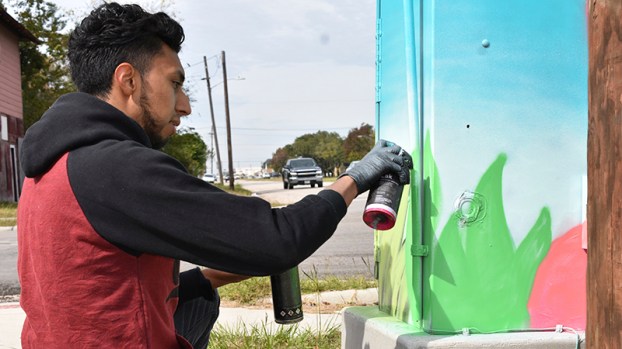 Port Arthur artist Elias Cabrera paints a junction box at the corner of Woodworth Boulevard and Seventh Street on Wednesday. He is one of a number of artists volunteering their talent to paint the boxes in the city. (Mary Meaux/The News)

If the comment from a passing motorist – “it’s pretty, thank you so much” is any indication that residents enjoy the painted utility boxes popping up across the city, that’s a good start because there are more to come.

The female motorist was driving down Woodworth Boulevard at approximately noon Wednesday when she saw Port Arthur graffiti artist Elias Cabrera painting at the intersection at Seventh Street. He had previously painted a flamingo and was finishing the scene across the panels. Another artist painted an egret and other birds on other panels of the box.

Cabrera has been painting for five years but involved with art since childhood. He feels Port Arthur needs the art, which is why he’s part of a project to transform the utility boxes into works of art. 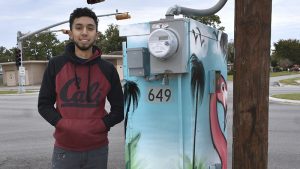 Port Arthur artist Elias Cabrera stands next to his finished work of art, a city utility box at the corner of Woodworth Boulevard and Seventh Street on Wednesday. (Mary Meaux/The News)

The art boxes are a city of Port Arthur project with the Port Arthur Convention and Visitors Bureau pitching in for the paint. The artists, themselves, are not getting paid, as this is strictly a volunteer endeavor.

Port Arthur resident Armando Ruiz is a local businessman and a recent member of the city’s beautification commission.

“I’ve been here 20 years and have never seen anything like this done before,” Ruiz said. “My office is in Beaumont and I travel from Port Arthur to Beaumont and see the (painted utility) boxes they have. I’m glad to see Port Arthur making a change for the better. It kind of feels like we’re making Port Arthur a little bit more welcome to people coming to our city.”

And, he said, with the upcoming industrial expansions and new jobs and economic growth, the city needs to look inviting.

Alberto Elefano, director of public works in the city, said 10 junction boxes were chosen for the artists to paint. There are a number of older boxes that will be replaced so the city didn’t add those to the list only for them to be taken down after.

Designs for the boxes have to get approval to make sure they are not political or too controversial.

“The hope is to brighten the city a bit,” Elefano said.

Local artist Linda Guillory is coordinator of the artists and heads up an Art Therapy Group. She has worked on painting the boxes in Groves and did some work in Port Neches as well.

“The purpose is to enhance my local cities and create beautiful art and inspire others to create their art and to volunteer to keep our cities clean,” Guillory said.

There are a number of boxes already painted, some by her, some by other artists. Those interested in volunteering to paint can reach Guillory through the Art Therapy Facebook group.

Ylber Nikshiqi, or as his friends call him “Barry,” has brought his European heritage to the front steps of Mid-... read more