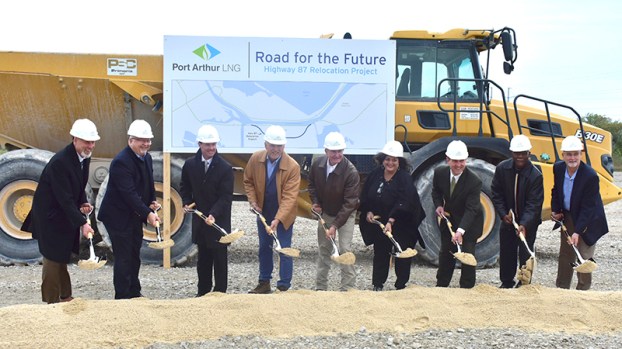 In order for Port Arthur LNG to export tons of liquefied natural gas to the world, a 3.6-mile portion of Texas Highway 87 first must be relocated.

State and local officials were on hand Thursday at the Keith Lake Boat Launch at Walter Umphrey State Park in Port Arthur for a groundbreaking ceremony to commence the $140 million project. Port Arthur LNG is footing the bill.

Marvin Ivey, senior project director for the Port Arthur LNG liquefaction project, said the current portion of Texas 87, between the Intracoastal Waterway and Keith Lake Pass extending into Sabine Pass, is standing in the way of the project.

“The road today runs right along the waterfront adjacent to the Sabine-Neches Waterway. In order to have ship access, we need to move pipelines and impact the Port Arthur city waterline so you can have access,” Ivey explained. “It’s been a requirement of us to find a way to clear the riverfront.”

The stretch of highway will move two-thirds of a mile to the west, clearing 3 miles along the waterway.

“Upgrading and moving the highway will greatly reduce impacts from erosion and flooding and will provide a safer route away from the waterway for Sabine Pass residents,” said Michael VanderMate, vice president of engineering and construction for Sempra LNG. Port Arthur LNG is a division of Sempra, based in San Diego.

“This project is a start to the thousands of jobs and other economic benefits that Port Arthur LNG intends to bring to Texas,” VanderMate said.

The new portion of the highway will follow the route of Entergy’s existing steel transmission lines.

The benefits of the relocation will extend beyond business. For Sabine Pass Independent School District Superintendent Kristi Heid, it means safer travel for students.

“The community of Sabine Pass has needed a new road for a very long time,” she said. “That one is in bad despair. Each storm season that passes, the ships going through are eating at the land. There’s a lot of wear and tear that gets washed away.”

“The upgraded portion of the highway will provide safe travel to and from the Sabine Pass area for residents and the many tourists that visit our coastal areas for recreation and employment,” Branick said.

Port Arthur LNG received in May authorization from the U.S. Department of Emergency to export about 11 Metric tons per annum of LNG to world markets. The project will include two natural gas liquefaction trains, up to three LNG storage tanks and ancillary support facilities to liquefy and load LNG onto ships.

McInnis and Ivey stressed the road project is just the first step toward a final investment decision by mid-2020 for the expansion project. Port Arthur LNG has agreements with Polish Oil and Gas Company and Saudi Aramco to deliver LNG starting in 2023.

Completion of the road relocation is expected to take 18-20 months, McInnis said, including six months for the rock and soil to stabilize.

Bechtel is the engineering, procurement, construction and commissioning contractor.

“We’re going to add jobs during construction,” he said. “We’ll have an average of 3,500 people. That’s for the liquefaction project.”

Councilman Harold Doucet asked all three finalists for Port Arthur city manager Wednesday what they thought was the form of... read more