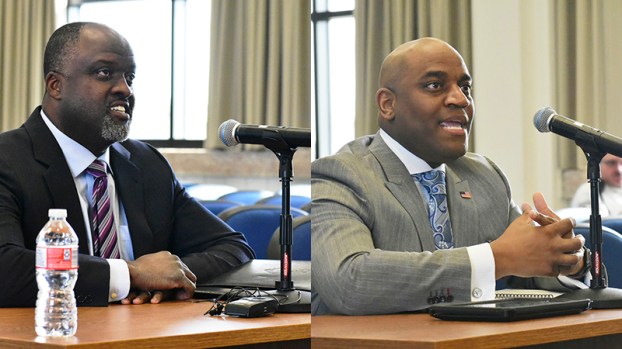 “I think there are some things that are in place that need to be followed through,” Moore said, “basically regaining the confidence and the assurance in the citizens that Port Arthur is a community of choice. If we put things in place to reestablish that trust going into the neighborhoods, identifying critical needs and putting them into our budget process, I think you will see the citizens will move back if there’s an opportunity.”

Currently a city administrator in Ellsworth, Kan., Moore and former Spencer, N.C., town manager Terence Arrington took questions from Port Arthur city councilmembers during an open interview for city manager Wednesday. In the end, Ron Burton, who has served in the interim for the past three months, was offered the position.

Among a long to-do list, Arrington saw infrastructure as a priority in rebuilding Port Arthur.

“Projects, infrastructure — the first thing is infrastructure, putting our heads together and identifying what the pressing need is and working our way out,
Arrington said. “What’s key is to identify needs, whether we do a plan or master plan.”

Arrington, Burton and Moore, in that order, were interviewed by Mayor Thurman Bartie and each council member in a near 3-hour open session before noon. The council unanimously approved an offer to Burton at 2:50 p.m.

Moore and Arrington carry big-city experience in civil service. Moore was city manager in Peoria, Ill., and Wichita, Kan. (the latter on an interim basis) and began his career in Austin while a student at Texas State University in San Marcos.

Arrington, who has a Greenville, S.C., address, worked in Charlotte, N.C., and Fort Lauderdale, Fla., before working as manager in Darlington County, S.C., and most recently Spencer.

Arrington resigned from Spencer in May after just six months, citing the town’s council “was already on edge with me about some things.”

He cited the operating budget and a master plan for the city as other top-three priorities.

“My management style is more of a collaborative, but by the same token, I’m authoritative,” Arrington said. “If something needs to be done, I’m going to do it. We’re going to get it done. The decisions that need to be made that are in the best interest of the city, if that involves making a difficult decision, then that difficult decision needs to be made to move us forward. I think that’s one of the key aspects of the role here in Port Arthur.”

Among Moore’s goals if was hired would have been to work with the city council to identify what is needed to attract former citizens of Port Arthur back.

“You want to regain something that we lost,” Moore said. “Anywhere in America, you have storms, in Kansas, in Missouri. You have Tornado Alley. But what does a community rebuild if we want to rebuild. What do we do to bring people back home?”