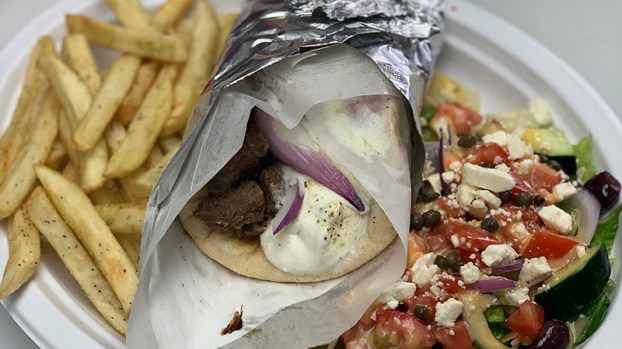 Ylber Nikshiqi, or as his friends call him “Barry,” has brought his European heritage to the front steps of Mid- and South County.

Greek Gyro celebrates, which opened at 3620 Highway 365 in June, mixes classic Greek delicacies with Mediterranean cuisine to provide a multitude of flavor and variety.

Co-owners Nikshiqi and his father Sal migrated to the United States from Albania almost two years ago, finding the area lacking in their favorite homeland foods. They quickly set to solve that issue.

“When we first came here we were looking for a restaurant to conveniently open,” Nikshiqi said. “I saw there was no Greek or gyros around here, so we decided to try one.”

Nikshiqi’s extended family owns the Tuscany Italian Restaurant in Port Arthur, where he began getting requests for their native food.

“In Europe, there are too many places selling wonderful gyros,” he said. “A lot of people asked us over (at Tuscany) where they could try gyros. I said I was going to open one day and as soon as I put the sign out on the front lawn everyone was excited.” 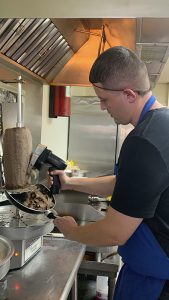 Co-owner of Greek Gyro in Port Arthur Ylber Nikshiqi cuts the thin layers of lamb and beef that will be served in a gyro. (Cassandra Jenkins/The News)

A gyro is a mixture of lamb and beef over pita bread, topped with thinly cut tomatoes, onions and tzaziki sauce. The sauce, which ties the mixture together, consists of Greek yogurt, cucumbers, garlic and lemon juice.

“A lot of people are skeptic because of the lamb,” Nikshiqi said. “But the meat that we use is high quality and is well spiced. It’s really good. I’ve had so many people come in and I make them try the meat. They always love it after they give it a try.”

“Baklava is a really thin pastry with walnuts and honey,” Nikshiqi said. “The layers are really thin so it takes time to be done. It’s special because you can’t find it in a lot of places around here.”

Nikshiqi said their restaurant stands out because of its infusing of Greek and Mediterranean food.

He encourages anyone who hasn’t tasted traditional Grecian food to stop by.

“When we first opened, our restaurant was consistently busy,” he said. “People wanted to try something new and see what we had. Now it is steady and we have our regular customers, but we’d like a lot more people that haven’t tried a gyro yet to come in.”

Tri-County area goes back to Blackboard Connect for emergency notifications

The method of notifying residents of emergencies and other pertinent information is changing back to Blackboard Connect but users won’t... read more