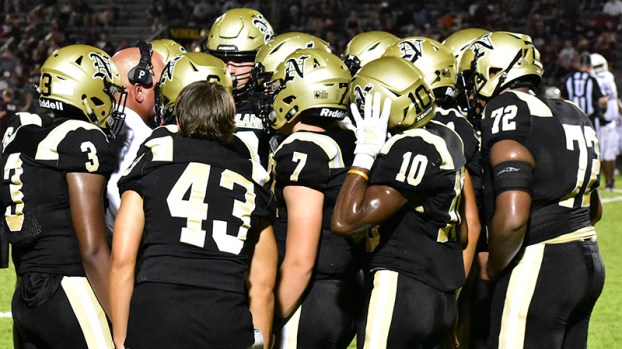 ROSHARON — Monte Barrow knew that his Nederland Bulldogs had a tough task in their 5A Division II bi-district playoff game.

The undefeated Manvel Mavericks, under Kevin Hall, averaged 51.3 points a game, featuring a pass-heavy attack led by senior quarterback Tucker Yarbrough. In the end, a determined Bulldog team was overwhelmed by the Mavericks 49-14.

From the Wildcat formation on the opening possession, Josh Mazyck gained 20 yards on two rushes for Nederland (4-7).  Bryce McMorris then threw an 18-yard pass to Rene Cunningham for a first down, but on fourth down, McMorris saw his pass skip off Kyndon Fuselier’s hands.

Nederland’s second possession led to trouble. On fourth down kicking into the gusty wind, Cale Baker’s punt only traveled to the Nederland 30.

Manvel (11-0) took advantage of the short field.  After a 7-yard run by Donovan Eaglin, Tucker Yarbrough threw for a first down to the Bulldog 12. Eaglin then carried twice into the goal line, finishing with a 3-yard touchdown.

That was the first of four touchdown runs for Eaglin, who finished with 17 carries for 180 yards.

After a touchback, Nederland was unable to move the ball on its next possession. Baker’s punt was partially blocked and downed at the Bulldog 39.

Nederland’s defense stepped up, stopping De’Monte Seymore and forcing Yarbrough to throw incomplete.  But on 3rd and 10, Jalen Paxton broke a tackle on a sideline route and scored from 39 yards out.

Going into the second quarter, Manvel used the rushes of Eaglin and Seymore, interspaced by a pass to Jalen Walthall, to score again. Eaglin carried it in from 2 yards out to make the score 21-0.

Mazyck then took over the game and finished the night with 133 yards on 26 carries. Starting at his own 29, he rushed repeatedly through Manvel to carry Nederland to the Mavs’ 9.  McMorris faked to Mazyck and kept it himself for a 9-yard TD scamper.

Kerrington Broussard picked off an ill-advised pass from Yarbrough and returned to the Mavs’ 6.  Mazyck powered in for the TD with only 9 seconds left.  Payne Barrow’s kick made it 28-14 as momentum appeared to be shifting towards the Bulldogs.

But the Mavs came back quickly in the second half.  Eaglin broke free over right tackle for a 65-yard touchdown.

Nederland risked a trick play: McMorris lateraled to Baker who threw to a wide-open Cunningham for a TD.  But, an illegal forward pass was called, and the Bulldog offense was unable to regain momentum, punting to Manvel’s 45.

Fuselier and McMorris hooked up to midfield and then Mazyck broke off another long run to the Mavs’ 39. A third-down pass to Bryson Garrett got the first down at the 26, but on the following fourth down, McMorris’ pass fell incomplete, and Manvel took over at their 20.

Eaglin scored his fourt TD of the night from 1 yard out as the Mavs built a 42-14 lead.

Nederland was unable to gain a first down on its next possession. Baker’s punt was blocked by Samuel Forest and returned 4 yards for a TD by Brian Wilturner.

Nederland’s third-quarter touchdown trick play was called back by a penalty.  The Mavs regained the momentum for the rest of the game.

Josh Mazyck, whose determined runs kept the Bulldogs in the game.

Nederland ends its season with a 4-7 record.  Manvel will play the winner of Lamar Consolidated and Lindale.

The Nederland Bulldogs came away from the Bum Phillips Bowl with a solid performance and a few good numbers to... read more