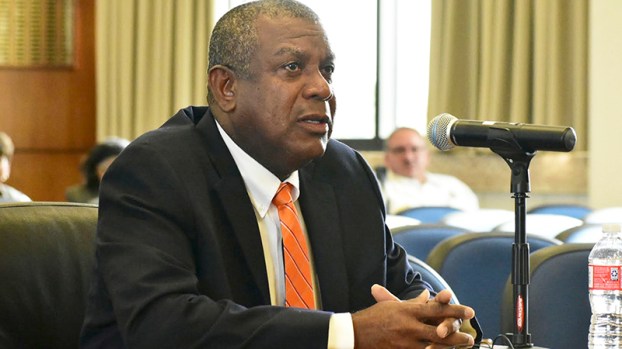 Councilman Harold Doucet asked all three finalists for Port Arthur city manager Wednesday what they thought was the form of city government.

The role Burton has taken on the past three months in the interim will soon become a permanent one.

Port Arthur city council members approved 7-0 to extend a contract to Burton for the permanent position at the conclusion of Wednesday’s open meeting in which the three finalists were interviewed before the public. A contract is expected to be finalized by Monday’s regular city council meeting.

“It’s humbling the city council made that decision,” Burton said immediately after the meeting. “There’s a lot of work to be done. We started going on that road 11 years ago, and we’ll continue to do that, to give this city the best we have to offer, both myself and the staff that we employ.”

Mayor Thurman Bartie said it was important for the council to approve in unison a contract to be extended.

“I feel the importance of it because of the quality of work that will ensue from this decision,” Bartie said. “Everyone on board, that further gives Mr. Burton that thrust he needs, knowing he had each of us who are on council there, to be able to be there has worked to move Port Arthur forward.”

Burton began his interview highlighting his path up the ladder since the city hired him in 2008 after stops in Hattiesburg, Miss., and Moultrie, Ga.

“I have provided diligent leadership,” Burton said. “When I first came in as assistant director of planning, two years later I was promoted to director of planning. Two-and-a-half years later, I was called by the then-city manager to implement every aspect of the Mercer Report that we needed city services. I diligently, with vigor, enthusiasm and with passion, implemented every facet of that report.”

Part of the implementation, Burton said, was a $2.2 million building for development services, which he said would be completed in the next 60-90 days. A geographic information system, a computer program used to collect and display data related to a specific location on Earth, has also been implemented under Burton’s watch.

“Today, we have a thriving GIS department,” Burton said. “When I came in, there was not one person that was certified as a building official. I saw to it the relevant training and opportunities to have staff trained and certified as building officials so we can continue to recognize and implement data and the codes that we have on the books.”

Burton is the third person to serve in the interim following the resignation of Brian McDougal in November 2017, two months after Harvey impacted the city. He did not enter his name in the hat until the last week of October, when an initial list of candidates was first made available to city council.

At the time Burton said he entered realizing the city was “on a momentum” and it would be a learning curve for a new person coming into the role.

Bartie asked Wednesday what would be the biggest challenge for Burton as permanent city manager.

Burton characterized it as also an opportunity.

If the comment from a passing motorist – “it’s pretty, thank you so much” is any indication that residents enjoy... read more