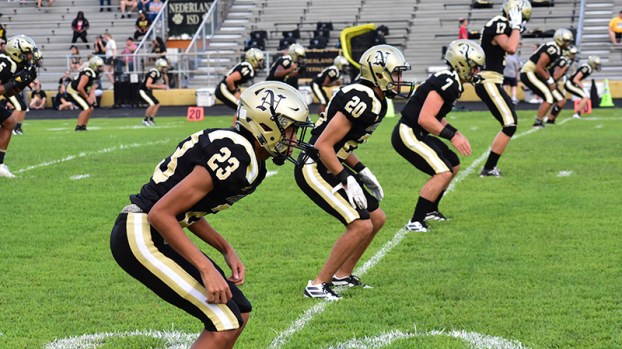 Nederland players practice before the start of their game against West Orange Stark on Aug. 30. (I.C. Murrell/The News)

NEDERLAND — The Nederland Bulldogs face the No. 2 team in Division II tonight. The Manvel Mavericks, District 11-5A-II champions, are undefeated and have scored 513 points this season. They ended Nederland’s playoff run in 2017 with a 51-26 win.

The Bulldogs are nonetheless looking forward to this challenge.

“They’re one of the power programs in Texas right now, so we know what we’re up against,” head coach Monte Barrow said. “At the same time, this is one of those things Nederland’s known for — playing somebody bigger, faster, stronger and trying to rise to that challenge. You don’t get that opportunity every week, so we relish that opportunity to go out and make a statement. You don’t get to do that playing someone who isn’t Manvel’s caliber.”

Manvel shares 11-5A-II with other high-scoring teams, such as district second-place Fort Bend Marshall, which has scored 20 more points than Manvel this season. Manvel’s defense has allowed 210.8 yards per game, comparable to Vidor’s 208. The rest of 11-5A-II has a similar spread of averages on defense among the teams as 12-5A-II, but five of 11-5A-II teams have scored 300 or more points. 12-5A-II has only two.

Against a high-scoring team, the Nederland defense is going to need to keep eyes on everyone across the line of scrimmage to stop them from making big plays.

“The thing we’ve been struggling with all year is limiting the big plays,” defensive coordinator Chris Theriot said. “We’ve given up a lot of big plays this year, and lot of that has to do with just one guy not getting a call right or not running what the defense was called. So that could come down to communication, alignment, eyes, there’s a lot of things that come with that. That’s been our Achilles heel, and we’ve talked about it.”

So far Nederland’s defense has given up 324.7 yards per game. Their weakness seems to be with rushing, allowing 1,924 rushing yards this season, the most in the district.

Communication is an issue when there are so many new faces on the defense, Theriot notes, but he believes his players have grown as unit.

“I think them trusting the person on their right and left — trying not to do someone else’s job, trusting to do your job — I think that’s something that they’ve slowly grown into,” he said.

The test will come from the Manvel offense. Senior quarterback Tucker Yarbrough is a dangerous thrower, completing 147 of 246 this year for 2,323 yards and a whopping 33 touchdown passes, the most in his district.

“They’re highly talented, a lot of speed everywhere, the quarterback throws the ball really well and very efficient,” Theriot said. “They’re not the most flashy, but they’re very proficient and they take care of the ball, so we have a tough task. We’re going to try to win first downs and get off the field when we can.”

It will be an away game, in their territory and it might be pretty cold, but those are things that the Bulldogs can’t control. Barrow says they need to take those things and make them strengths.

“The fact that we’re playing at their place, they’ll be more comfortable there,” he said. “The weather that we’ve been getting out in this week, it’s not going to be warm Thursday night. It could be raining, so we’re prepared for that. Those things that you can’t control we have to make our advantage, without a doubt. We’ve impressed on our players this week that the things we don’t control are a positive for us.”