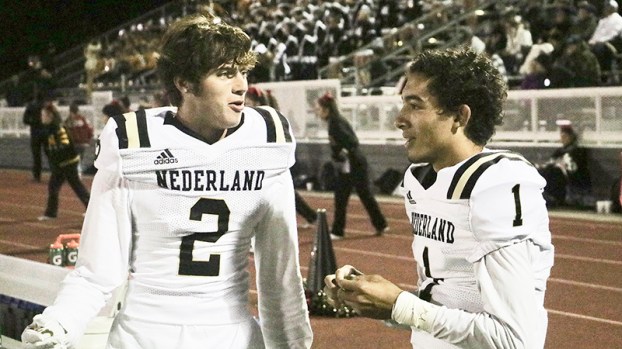 Kamden Grant (2) chats with Nederland teammate Bryce McMorris during a Nov. 1 game at Crosby. (Michael Sudhalter/Special to The News) 11-1-19

The Nederland Bulldogs came away from the Bum Phillips Bowl with a solid performance and a few good numbers to brag about.

In particular, quarterback Bryce McMorris tallied his 2,000th passing yard, the only player in District 12-5A-II to do so in the regular season this year.

The current Nederland record for passing yards in a season is 2,309 made by Dustin Hood in 2004, according to head coach Monte Barrow. Hood did his damage in 13 games during that season, though, and Barrow believes it is still possible for McMorris, who has only played in 10 so far, to threaten that record.

“As far as a regular season 10 games, Bryce surpassing 2,000 — I think that’s the first time that’s happened,” Barrow said. “Just for him and the guys he plays with offensively, that meant something.”

For McMorris, this was possible because he knows the players he throws to, like sophomore Kyndon Fuselier and juniors Josh Mazyck and Rene Cunningham, are quite capable of making those big plays.

A big part of staying safe in the pocket is also trusting his offensive linemen to keep him protected. McMorris gives the linemen credit for making these big plays possible.

“They just need to give me a little bit of time,” he said. “They’ve been doing a lot better since the preseason, but they’ve been giving me a lot of time to do my thing.”

It also takes time to build that kind of trust over a season, but McMorris has been working for years on his own proficiency and staying calm.

“When he really started trusting his O-line, being able to sit in the pocket and take the time to make the reads, he started becoming more efficient, passing percentage wise,” Barrow said “It all goes hand-in-hand — trusting guys that may be covered to some extent but being able to throw them open so those guys can make plays with defenders around them.”

The numbers have added up, too. McMorris ended the regular season with 2,094 total passing yards, the top in the district. He went 134 for 231 for a completion rate of 58%.

“I think he really worked on it all season, worked on his reads,” Barrow said. “He doesn’t just have one guy and if he’s not there he takes off running. He has a progression he goes through, and he started trusting in that.”

Going into a playoff game against undefeated Manvel, McMorris says he and his team definitely believe they can win.

“I’m just ready to play, we’ll be just fine,” he said. “We have to believe we can beat them. We can’t just go in there scared, unprepared. I think everybody’s ready and it’s going to be a show.”