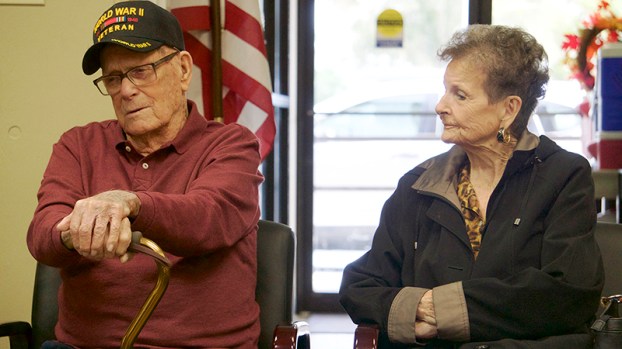 Don Clotioux, left, a Nederland native, and his wife Billie spoke at the Mid Jefferson County Retired School Personnel meeting Tuesday. Clotioux was invited as a special guest speaker to talk about his time spent in World War II and as a German Prisoner of War. (Cassandra Jenkins/The News)

NEDERLAND — A 20-year-old Don Clotiaux sits in the belly of a B-24 gunner. As a member of the United States Army Air Corps, he is surrounded by his brothers in arms staring at an oncoming German fleet moments from blasting them out of the sky over hostile territory. 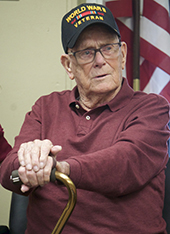 The now 95-year-old sits in a room full of senior citizens posting up with a cane and a smile, as if he isn’t about to tell a room full of people about the events that could have ended his life nearly eight decades ago.

His story starts in 1942 on the battlefields of Hungary and Germany.

Clotiaux spoke clearly as he remembered one of his close encounters with death. The Mid Jefferson County Retired School Personnel meeting welcomed their guest speaker Tuesday at the Ritter Senior Citizen Center as all attention was turned toward the World War II veteran.

“We had 5,000-pound bombs on board,” he said. “We salvaged one of them and were able to pick up just enough speed to drop it, but we knew the fire was on us. It didn’t last long and we were shot out.”

Out of the 10 men on board that day, only six made it out of the plane, barely including Clotiaux. 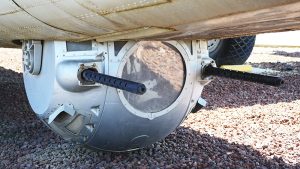 Don Clotiaux, a Nederland native, was a part of the United States Army Air Corps in 1942-45. He operated a ball-turret in a B-24 gunner fighter plane during World War II. (Courtesy photo)

“We lost our pilot,” he said. “We lost our nose gunner, tail gunner and waist gunner. I was the last one to get out of the plane because I was in the small ball turret completely outside of the airplane. I had to get in the plane, snap on a chest type parachute and bail out.”

In good spirits, Clotiaux joked to the room that all he could think as he fell through the sky was that he could really use a cigarette. Upon landing, Clotiaux said he came face-to-face with a 40-year-old German soldier.

“He was waiting for me when I got done,” he said. “He shot at me and it went inches from my ear. I fell to the ground and then thought I might as well get up and see what was going to happen. So I did. He pointed the gun at me and I realized I bled all over my shirt. I found a hole, so he took me to where he was staying and they sent me to a hospital in Vienna.”

Initially Clotiaux declined wanting to go a civilian hospital, but found it was the last place he would sleep on a warm bed, eat a regular meal and be slipped a cold beer.

“I ended up in Berlin one night,” he said. “The English had an air raid in the middle of the night and they just drop them with no target. Luckily, we got through and after that we went to a camp.”

Clotiaux said the biggest struggle he faced in those several months was finding food, a feat he managed by stealing rations from the Germans and sneaking cow food from unattended barns.

After spending seven months in the prisoner of war encampment in one of the coldest winters in the country, Clotiaux and the others saw the light at the end of the tunnel as the Allies officially won the war on Sept. 2, 1945.

“I was staying in a barn at the time with 250 other men after we were forced marched across Germany for 86 days and over 600 miles,” he said. “The Germans came in and told us we were going to be turned over to the English.”

After being liberated, Clotiaux was sent to New Jersey and then San Antonio, where he found his way back to Nederland.

During his 60-day leave he rekindled with a long ago friend, Billie, and the two were engaged within two months. The couple celebrated their 74th anniversary last week.

Clotiaux is also a recipient of the Purple Heart and received a European Theater of Operations medal and an air medal with four clusters for the completion of several missions.

PORT NECHES — Jake Plante did a few quick pull-ups as his mom sat on a nearby bench at the... read more