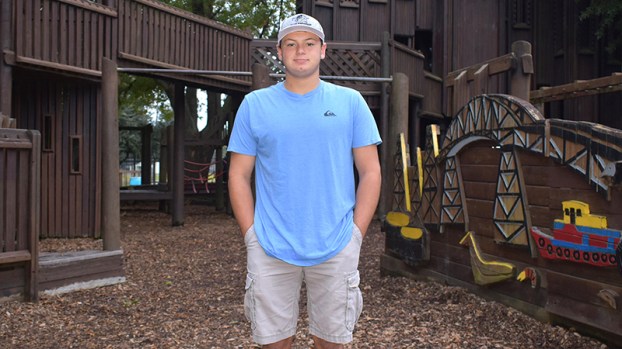 Jake Plante, a senior at Port Neches-Groves High School, stands not far from the area he fell 30-feet from in 2015. He has recovered from the fractured pelvis and internal bleeding and is active in sports and academics at school. (Mary Meaux/The News)

PORT NECHES — Jake Plante did a few quick pull-ups as his mom sat on a nearby bench at the park.

It was almost dusk and nothing seemed out of the ordinary, just a 17-year-old baseball cap-wearing kid killing some time.

But what makes this scene out of the ordinary is Jake himself. Nearly four years ago to the day, he fell 30 feet from one of the castle-like structures behind him at Tugboat Island in Port Neches Riverfront Park, fracturing his pelvis.

His is a story of perseverance, faith and community support.

Jake was in eighth grade, 13 years old at the time and out of school on Nov. 23, 2015, for the Thanksgiving holiday. At first he was by himself and was later joined by a cousin.

And he remembers everything about the fall. He was at the top of one of the structures, one hand had a grip but the other hand slipped. He didn’t think much of it; he would just try again to get a better grip. Then his other hand slipped too and he fell 20 feet and ended up straddling a board.

As he sat there on the railing he thought, ‘OK, this is good, this is over’… then fell another 10 feet to the ground.

“There’s a lady who’s always there telling kids not to climb up there and the one time she’s not there, I fall,” Jake Plante said.

An ambulance was called and he remembers talking to the first responder who felt his body and noted a deformity – he wanted to feel it too.

He was first brought to Christus St. Elizabeth Hospital in Beaumont, which has a trauma unit.

His mom Kelly Plante remembers the phone call. She knew he occasionally climbed the structure at the park though she didn’t approve. The call came from a cousin asking her to get to the park because Jake had fell. Then another urgent call, “where are you? He can’t feel his legs.”

“I was by Market Basket and Walgreens and of course I’m speeding and got pulled over by a cop,” Kelly Plante said.

She told the cop the reason and he escorted her to the park.

The hospital and recovery

The initial CAT scan showed only three fractures and the hospital was going to place him in the intensive care unit and see if he could stand the next morning, Kelly said, adding her and her husband Jason had Jake life-flighted to Texas Children’s Hospital in Houston.

While there they learned he had six fractures and internal bleeding.

He has been through three surgeries so far with eight screws and a plate placed in his body.

Kelly explained Jake’s bladder was also injured, plus he had a filter in a neck vein to keep him from getting blood clots, had a blood transfusion and more.

At one time, she said, doctors thought his kidneys were paralyzed — reiterating the seriousness of his injuries.

The teen was not able to stand for four months and he wasn’t able to take his first steps until March or April 2016.

“People brought supper every day to us for the first month he was home,” Kelly said.

Coaches visited, his middle school made a prayer chain that circled the room and there were fundraisers to help with medical expenses.

Teresa Burnett, who was the school nurse at Woodcrest Elementary when Jake attended the school, and teacher Maria Sims, who is also Kelly’s friend, visited Jake when he was in Houston.

“We got him a little purple Christmas tree and brought it up there,” Burnett said.

Jake has always been active and remains so. A Port Neches-Groves High School senior, he is on the tennis team, swim team, PNG fishing team, Key Club, National Honor Society, Youth-Leadership Southeast Texas, Rotary Youth Leadership Awards and is one of 24 out of 500 students chosen to work with the organization as a counselor.

In addition, he is a member of G-Crew and Tribe, volunteers with the Port Neches Chamber of Commerce helping with RiverPasses during RiverFest, active in his church, certified as a lifeguard and already has 24 college credits.

Jake plans to go to Lamar University in Beaumont to major in chemical engineering and Spanish.

“He just has the spirit of survival, a big smile on his face,” Burnett said of Jake. “He’s got a big heart and he has made the best of a terrible situation.”

Kelly described how she made it emotionally while watching her oldest son go through so much pain.

“I have so much faith I never questioned why,” she said, her voice dropping to near whisper and eyes filling with tears. “Once I heard on the phone that he was alive, even if he would be paralyzed and would never walk again, he’ll be OK.”

Lessons were learned and no matter what, you can make it.

“You will have trials and tribulations but you can always overcome,” she added.

Jake has one more surgery to go. This one is scheduled during the Thanksgiving break to take six screws and a metal plate out of his body.

Jake knew he had to keep fighting to come back from the injury and what kept him going is his brother.

“I wouldn’t want to quit with my little brother watching,” he said of his 7-year-old brother.