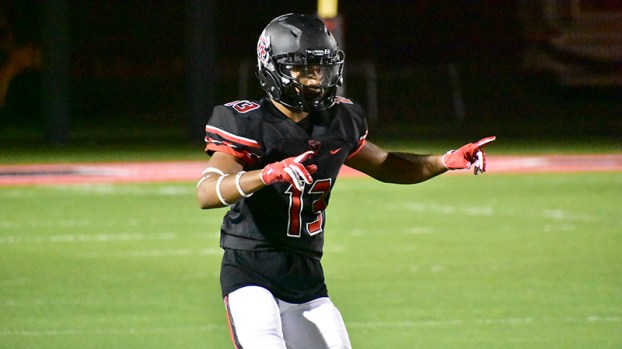 Jah’mar Sanders completed 4 of 9 passes for 133 passing yards, along with two touchdowns of his own. Jaylon Guilbeau has made two interceptions this season, one he ran back 32 yards for a touchdown against Houston Wisdom.

All three of these playmakers are sophomores on the varsity team.

“Making big plays in varsity feels good because you’re helping your team out but you’re also helping yourself — you’re progressing,” Guilbeau said. “Varsity is a faster pace than freshmen. It’s all about getting better and focusing on what you need to do.”

The Titans have made the best of their talented rising players, getting used to varsity play while they were freshman last year during the last two regular season games. Head coach Brian Morgan saw something special in these players and wasn’t worried about starting them young.

“It’s a talented group,” Morgan said. “There’s some overall good kids in that group but I think it’s a group that’s got some really good off-the-field characteristics and really good leaders to go along with that talent. I told a lot of people around here that that’s a special group coming through here. I’d tell them I had no problem playing those guys at a young age, because I think they all can play and they’re going to be really really good players.”

What Morgan saw in this class was a simple drive to play football, enough of a drive to make a difference.

“I think more than anything it’s that this group of kids really bought in and just wants to play football,” he said. “That sophomore class in particular, you’ve got a lot of guys I think just really enjoy playing football, and that’s noticeable when you compare it to some of the other groups.”

Guilbeau agrees that for him and his sophomore teammates, the drive to play is what makes the players shine. He knew what to expect of varsity football and knew his own abilities.

“In my freshman year I expected it,” he said. “I knew I wasn’t really like as I am now. It just takes time to get better. You’ve got to love the game.”

Morgan notices the improvements as well.

“Guilbeau’s had a good year but he’s gotten way better as he’s gone on,” he said. “Jah’mar has had a good year, but the last half of the season he’s a whole different player than he was at the beginning.

“Adrian, finally, in the last three weeks, it kind of clicked for him,” Morgan joked while Hayward sat in his office. “We’ve been waiting for it and it really has. “It’s something we saw in eighth grade and it’s just taken a little bit of time.

“I think guys like Guilbeau and Sanders having success early, makes their classmates and friends understand, ‘Hey, I can play with these guys too.’ It gives everybody some confidence.”

Heyward and Guilbeau are definitely confident, even going into their first playoff game against Shadow Creek.

“I feel like if we go in playing this game the way we started playing the last game, I feel like we could beat them,” Hayward said.

“It’s my second year in the first round,” Guilbeau said. “I feel like we can beat this team. It just takes hard work and dedication.”

What does it take to win with a schedule of competitive District 12-5A-II teams and win against a competitive rival... read more