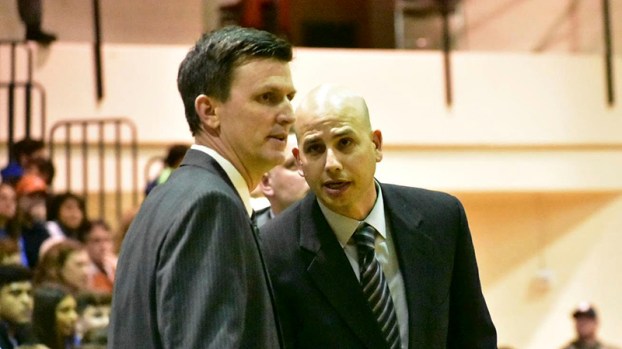 Chris Smith, right, assisted Brian English on Nederland’s boys basketball staff for the past decade and will take over as PNG’s head coach. (I.C. Murrell/The News) 1-18-19

Pat Abel apparently didn’t keep a record of total wins and losses, but the Port Neches-Groves Indians boys basketball team had more wins last season than they had in decades.

Abel also stepped down as head coach of the Indians last season, and longtime Nederland assistant coach Chris Smith stepped up to take over. Smith is well aware of the 19-season legacy Abel left behind.

“I think Coach Abel did an unbelievable job for 19 years,” Smith said. “I’m just trying to build on the success that he’s made there. They had a great year last year, and we’ve got a lot of pressure on ourselves to try and repeat it. That’s our main goal — build from traditions.”

That doesn’t mean Smith will stick to the old ways. He believes change can always be a good thing, and the team will find out how good it will be in the upcoming season. The Indians begin at Little Cypress-Mauriceville on Tuesday.

“I think our kids are going to be a little more free with the ball,” Smith said. “Offensively I think we’ll open it up and maybe shoot the ball a little more than what they were accustomed to. Also we’re going to bring a different style of man defense down here that we think we can be successful with our kids.”

Smith began at Nederland high school 15 years ago as the girls varsity basketball coach for four years, then switched over to the boys side and worked under coach Brian English as an assistant coach for the rest of his tenure. He’s a Nederland homegrown man — he went to school there and played basketball there.

Now, Smith is fashioning himself as a Mid-County man instead.

“There’s only a few jobs that I’d really go after and Port Neches-Groves was one of them,” he said. “I always said that if Coach Abel would step down that’s one of the jobs I’d go after. And whenever he did it last spring I applied, interviewed and was lucky enough to get the job.”

The transition has been smooth, so far. Smith says PNG has treated him well and he’s meshing with his players.

“So far it’s been a joy,” he said. “The kids have worked hard. We’ve got a great group of senior kids that have embraced me and embraced all the changes that I’ve made. We just hope it shows on the basketball court.”

Smith will get to head his own team now, with junior varsity coach Jacob Sanford, another new face from the Dallas area, and assistant coach Blake Austin, the freshman coach for the last three years, supporting him.

There’s more to being head coach than coaching, incidentally. Smith is now responsible for scheduling, paperwork, phone calls and ordering supplies for his players.

“First of all, you don’t realize all the behind-the-scenes work that you have to do,” he said. “When I was an assistant coach, I would just show up and whatever coach English told me to do, I’d do it.

Smith also has the pressure that a new coach faces in the wake of the old order.

“We’re going to have our struggles,” he said. “I’ve been an assistant for 15 years. I’ll make my mistakes, the kids will make their mistakes and we’re going to grow from every mistake we make and make it a positive.”