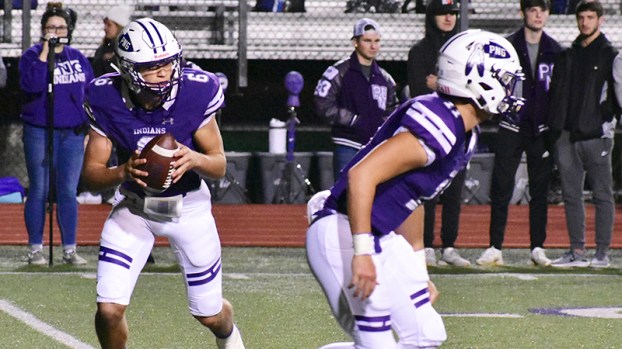 Blake Bost of PNG, pictured in a prior game, threw for 208 yards against Nederland in the Nov. 8 Bum Phillips Bowl in Nederland. (I.C. Murrell/The News) 11-1-19

What does it take to win with a schedule of competitive District 12-5A-II teams and win against a competitive rival in the biggest game of the season?

Part of it is not letting the pressure get to you and having trust.

“I don’t try to feel the pressure,” junior Port Neches-Groves quarterback Blake Bost said. “I know my teammates got me and my coaches got me, and I trust them and trust my abilities.”

He did trust them. He trusted receivers Kaleb Wuenschel and Peyton Proenza, to catch passes of more than 30 yards to make three of the Indians’ touchdowns against the Nederland Bulldogs on Friday at the Bum Phillips Bowl in Bulldog Stadium. He trusted the PNG defense to hold the Bulldogs back. That trust got the Indians a 27-21 win in the last game of the regular season.

For his and the team’s accomplishments, Bost is named The Port Arthur News’ Player of the Week for Week 11.

Head coach Brian Faircloth was proud of Bost and the Indians for their performance.

Bost believes his team had a great season this year from the hard work everyone put in.

“I think we’ve done really well. We’ve had great games on both sides of the ball, offense and defense,” he said. “I think it’s just been an overall great year.”

Bost certainly has had himself a great year. He went 15 of 21 for 208 passing yards on Friday, 13 more yards than his Nederland counterpart, senior quarterback Bryce McMorris. He still has passed more than every other quarterback in 12-5A-II, making 179 completions on 309 throws for 1,857 passing yards. Bost has also gotten 14 touchdowns from those completions.

He’s tied with Nederland junior Josh Mazyck and Baytown Lee senior Ijenea Wooley for number of rushing touchdowns, though both Mazyck and Wooley have more than 50 more carries than Bost for the season.

All this is evidence that Bost has done what PNG counts on to succeed — hard work.

“Since he was in seventh grade he’s been a quarterback,” Faircloth said. “Following after Roschon Johnson, who worked really hard, Blake’s done the same. The only way we know how to go about things is through hard work over here. He works hard, he puts in extra time, he studies film, he dedicated himself to being the best quarterback he can be, and it’s paid off for him and our team.”

For the short time he’s allowed, Bost says that of course it felt good to get the win for PNG over Nederland in the fashion that they did, but it’s already time to look ahead and prepare to continue the season in the playoffs against Fort Bend Marshall (9-1, second in 11-5A-II) at 7:30 p.m. Friday in Missouri City.

“We feel pretty confident,” Bost said. “They’re a really good team but if we click on both sides of the ball I think we have a great shot.”

Other big performances of the week in Mid- and South County from Week 11: