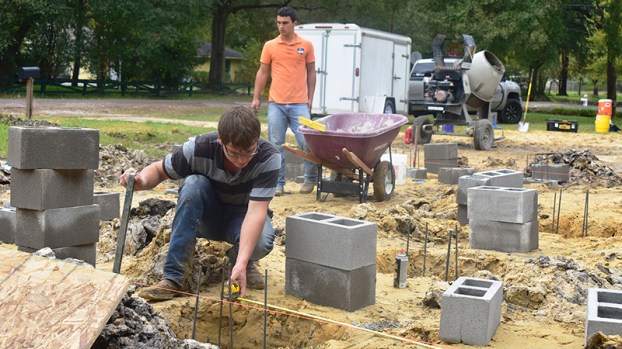 Bradley Weaver, 21, in foreground, and Kyle Martin, 19, both of Lancaster County, Pa., work on the floor plan for a home on 6th Avenue in Port Arthur on Monday. The two men are volunteers with Christian Aid Ministries. (I.C. Murrell/The News) 11-12-19

When Paul Hurst volunteers to help rebuild a home, he does so with a higher purpose.

“… Mainly sharing the love of Christ to those who maybe didn’t have it as good in a tragedy like this,” he said.

Since Hurricane Harvey tortured Port Arthur in August 2017, Christian Aid Ministries (CAM) has sent many volunteer crews to rebuild or repair homes across town. CAM is based in Berlin, Ohio, but has distribution centers in 12 locations around the world, including Romania, Nicaragua, Ukraine and Liberia.

The organization assesses damage in a location hit by natural disaster and then calls on volunteers to help and sets up a base or bases there. It also distributes food, clothing and Bibles to those in need, among other efforts.

Many volunteer crews, like Hurst’s, have been staying at Memorial Baptist Church on the intersection of Memorial Boulevard and 39th Street. Memorial Pastor Bill Brazell said about 16 mission teams have set up at his church and rebuilt or rehabbed more than 50 homes in Port Arthur since January 2018.

One crew is working on a home in Beaumont, which was impacted by Tropical Storm Imelda in September.

“There’s a long list of things they’ve done,” Brazell said, in helping the church rebuild from Harvey, including restoring the gymnasium and other rooms. “They dedicate homes to the Lord every time they finish. They’re gracious and kind people who love the Lord Jesus and want to point people to His church.”

Hurst, a 58-year-old home improvement store owner from Myerstown, Pa., is leading a group of about 20 people, including 10 men ages 18-21, two crew leaders and their families, all of whom are from the Keystone State. The young men are working on rebuilding two homes in the city, one of which is near completion and another being started from the ground up. Another crew will come in two weeks and finish that project, Hurst said.

“[The homeowner on 42nd Street] that was totally devastated needed all new windows, new doors, new patio doors, all new inside wiring, plumbing,” Hurst said. “It’s coming together. I think it’s really coming together with all the crews we have. These are our two main priorities.”

“Sharing the love of God with others as we mingle with them, that’s our message,” Hurst said. “We’re here just as servants of Christ to do what we can for those who are hurting.”

Lamar State College Port Arthur is bringing a new program and degree under its diverse umbrella next year. The Associate... read more