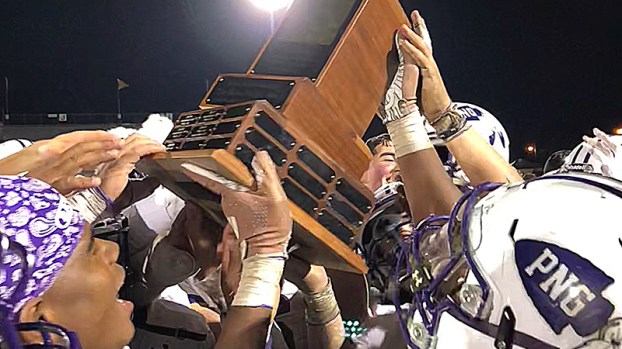 Bulldog Stadium might have given LSU’s notoriously loud Tiger Stadium a run for its money last Friday.

When Port Neches-Groves linebacker Caison Denzlinger stopped Nederland running back Josh Mazyck on fourth-and-1, seconds left in the game, 9 yards away from the end zone and a possible 28-27 Nederland win, you might have seen me on the field down by the Bum Phillips Bowl Trophy noticeably wincing.

I was on the clock that night, so I wasn’t there rooting for either team. No, what got me was the sheer volume of noise that erupted from the PNG side of the stadium when it was clear Nederland had finally been halted.

I had talked to fans in the stands Friday night about their experiences. I talked to a few others who waited in line to get tickets the night before they went on sale. I had spoken with some of the players who had played in this game before, and they told me what it was like to go out in front of 10,000 friends and neighbors.

I asked the coaches to explain what made this game different from all the others. I learned the Nederland-PNG rivalry had been named the biggest rivalry in Texas. All the folks I spoke to told me just what this game means to these schools and communities.

Yet, that powerful noise surprised me. Reading about something is no substitute for experiencing it yourself.

My experience was nonetheless different from most of those around me. Coming from neither Nederland, Groves nor Port Neches, and with no relatives or ties to the schools, I didn’t have too much bias to color my impressions.

That means I was going to be neither disappointed nor necessarily ecstatic about the outcome, whatever it was going to be. From the volume of that PNG crowd, the joy of victory must have been enormous; I’m sure there was an equal level of disappointment from Nederland.

Since I was also working, much of my time was spent focusing on doing my work, and I didn’t actually get the chance to see much of the game in the first half. As engrossing as the experience might be for fans and players, my mind was mostly on doing what I needed to do.

One of the things I needed to do was carry that trophy to the winning team. It’s not heavy per se, but the holder needs to be careful not to hold it by the hat on top of the football since it will come off. As everyone could feel that night, it was getting quite cold. Many could probably also guess that the field was torn up and very muddy. While PNG players and fans were storming the field riding high on celebration, I was so very carefully walking with that trophy, commanding myself over and over, “Don’t drop it. Don’t drop it.”

But what I remember most was the noise that pierced through my bubble of work and detachment. For that one particular moment it was crystal clear just what this game meant.

Brad Robichaux is the sports editor of The Port Arthur News. He can be reached at brad.robichaux@panews.com

Each year on Nov. 11 we commemorate Veterans Day. This originates from the armistice that ended World War I, which occurred... read more