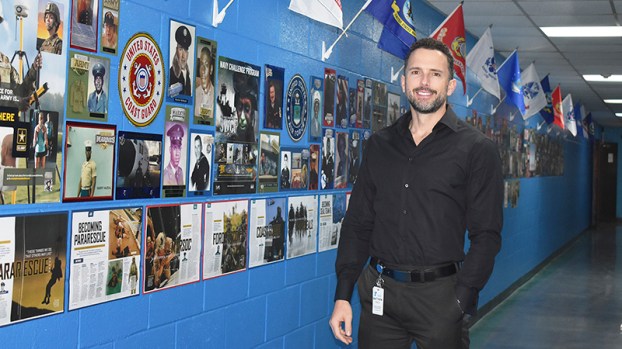 Matthew Jewell, interim executive director at the YMCA of Southeast Texas, stands next to the Veterans Wall. (Mary Meaux/The News)

The YMCA of Southeast Texas is celebrating its members and their families who serve or have served in the U.S. military.

Inside the busy facility at 6790 9th Ave. there is a wall with photos of veterans as well as military posters, flags, logos and information on each branch and more.

Kathy Pollock, finance director at the Y, is the brainchild behind the tribute that covers all branches of the military. She has been doing the Veterans Wall for a number of years with the exception of 2017 after Hurricane Harvey.

And the members love the tribute.

Matthew Jewell, interim executive director who has been at the Port Arthur location for about four weeks, said one of the members who is retired military brought him over the wall and challenged him to find his photo among the many on display. 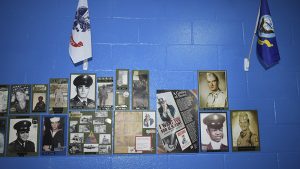 A portion of the Veterans Wall at the YMCA of Southeast Texas honoring members and their family members who are active or retired military members. (Mary Meaux/The News)

The member, retired U.S. Army Sgt. Major Jesse Wills, is seen in his uniform in the photo. He asked Jewell if he knew why he wanted him to find his photo.

“He is so proud to have served, happy to be part of the Army and all the difference it made in his life and his education,” Jewell said.

Pollock said the Y members love the wall and some go by to see their photos. She keeps the photos from year to year and adds to them. Some of the honorees have since passed away.

Pollock’s father, who is now deceased, was Gene Godfrey, master gunnery sergeant in the U.S. Marines.

“My dad was in the military and I grew up a military brat and loved moving around,” she said. “It’s nice to hear people give respect. Even as kids on the base we would stop what we were doing when we heard, say Taps, and put our hand on our heart.”

The Veterans Wall at the Y will be on display through Dec. 1.

See how much Texas gas prices have risen in past week

Texas gas prices have risen 2.3 cents per gallon in the past week, averaging $2.27/g today, according to GasBuddy’s daily... read more