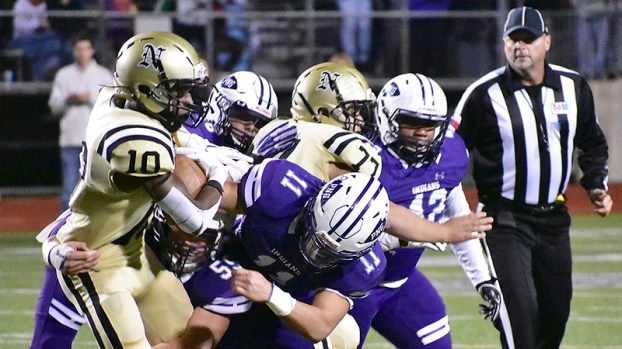 Nederland running back Josh Mazyck carries the ball as PNG safety Zane Hernandez brings him down during the Nov. 9, 2018, Bum Phillips Bowl game in Port Neches. Hernandez is now a running back. (I.C. Murrell/The News) 11-9-18

Who deserves it more? PNG, Nederland fight for postseason prospects

The Nederland Bulldogs and Port Neches-Groves Indians sit tied with the Crosby Cougars for second place in District 12-5A-II record at 4-2.

Both Nederland and PNG are under pressure to come out on top, never mind the unique atmosphere the Bum Phillips Bowl garners due to the intense rivalry. It’s all up in the air now and it won’t begin to resolve until the game starts at 7:30 p.m. at Bulldog Stadium.

Last year both teams vied for the top spot in the district, and both ended up earning a share of the district title after PNG gave Nederland its first loss of the season with a 34-21 win.

Nederland went on to defeat Fort Bend Willowridge in the bi-district round and lost against Marshall (northeast Texas) in the area round, 63-24.

PNG made it all the way to the Region III semifinal by defeating Houston Northside and Lindale, but Fort Bend Marshall ended PNG’s postseason, as well, 53-14.

PNG still dominates the series 50-38-7, though Nederland is ahead in the Bum Phillips Bowl games after the name changed, 3-2. Numbers are nice, but they don’t matter so much to this year’s postseason prospects.

It’s not just about bragging rights or a trophy — the outcome of tonight’s game might determine which team deserves a better chance of playing more football in the postseason.

Indians head coach Brian Faircloth readily admits that both teams have been competitive this year.

“They did a great job versus the Crosby team last week,” he said. “They’re the same team every year. Anybody they play, they’re tough on them. You’ve got to go play really well to beat them. Coach [Monte] Barrow and his staff do a great job. It just provides for an awesome, awesome football game that we’re really excited to be a part of.”

PNG’s defense has come a long way since a loss to Baytown Lee. The Indians have allowed the second fewest passing yards so far in district play, only 16 yards behind Barbers Hill, who has the fewest. They are averaging 286.4 yards allowed per game, compared to Nederland’s 316.6.

Linebacker Donovan Bergeron even managed to recover a potentially game-changing fumble from undefeated Barbers Hill near the end of last Friday’s game when the Indians were only 5 points behind the Eagles.

“I’m very proud of them,” Faircloth said. “We still found a way to get a turnover there at the end to give our offense a chance. The kids played hard and left it all out there on the field versus a really good team, they did everything we asked of them, that’s for sure.”

On offense, no one in the district passes more than PNG senior quarterback Blake Bost, and by a hefty margin, going 162 for 286 this year.

Bost also has three highly proficient wide receivers to choose from. Junior Brady Nail has 45 receptions for 468 yards and three touchdowns. Seniors Peyton Proenza and Kaleb Wuenschel each have 408 receiving yards and are neck-and-neck in catches, with Proenza having 38 and Wuenschel 37.

Senior Zane Hernandez is just as reliable, making five receptions for 45 yards against Barbers Hill last week. Bost knows how to carry the ball, too, with 318 yards on 93 carries this season.

“He’s a big athletic kid, one of their better athletes I believe, so we’re going to have to be in tune, not just with him throwing the football, but when he pulls it down to run, making sure we’re up making the tackle for minimum gains,” Barrow said.

For Barrow, success is going to come down to controlling the line of scrimmage.

“We’re successful when we control the line of scrimmage with our offensive linemen,” he said. “We’ve got guys that can make plays and do things with the ball after they catch it or get it in their hands. That’s important for us offensively.”

Like Bost, McMorris is a power when it comes to passing. He leads the district in passing yards, 1,903, which is 566 higher than the next best, Barbers Hill’s junior quarterback Christian Kaopua.

The Bulldogs and Indians are only 4 yards apart on total rushing, but the Bulldogs outpace the Indians by 136 and lead the district in passing yards.

Nederland junior Josh Mazyck is ranked second among rushers, just behind senior Brad Nunez of Vidor. He’s gotten 766 yards on 141 carries, and he’s tied with Bost for second most touchdowns with nine.

On receiving, sophomore Kyndon Fuselier leads the district with 764 yards from 43 receptions. Senior Bryson Garrett and Rene Cunningham are likewise reliable with 394 yards by Garrett and 308 by Cunningham.

“They’re well rounded, they throw it really well, they have a great running back, a good offensive line,” Faircloth said of Nederland. “They play hard on defense too, so they’ve given everybody trouble all year long. They’re fighting for a playoff spot; they’re going to be all we can handle.”

It will be up to the defense, Barrow says.

“We have improved (on defense), which is what you want to do as a team,” he said. “I think we really grew up against Vidor, as much as we were on the field and the type of game that that was, field conditions not unlike they may be this Friday. We had a slow start against Crosby, but they buckled down, we challenged them at halftime, and we came out in the second half looking like the team they were working toward being.

“Defensively we have to be lining up correctly — they’ve got a bunch of formations they do the same plays out of — and communicating defensively with all that’s going on, the whole atmosphere, and them and their formations and their motions making sure we’re sound when the ball snaps, and then it’s just about who makes the play.”

If you hadn’t been through it before, you’re not going to know yet what it’s like, according to Nederland head... read more