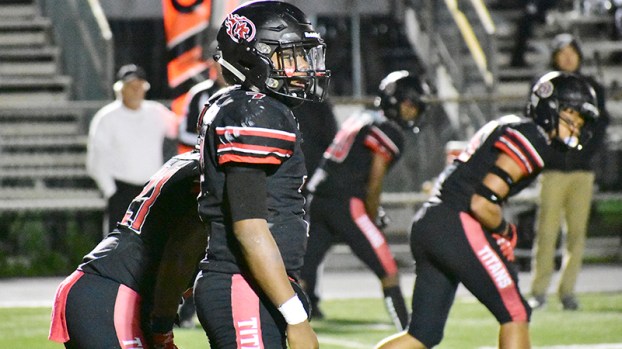 “Riding that momentum” – Titans in for good test against Mustangs

The Memorial Titans came back bruised after their loss three weeks ago to New Caney but had a long week to recuperate and an easier opponent to get their confidence back. Even so, head coach Brian Morgan said the team still took their game against Houston Wisdom seriously and played their best.

“It was an easy game to not focus in, to be honest,” he said. “ We got stuck in traffic going there and there were lots of things that could get you to say, ‘Oh, yeah, slow start…’ and we didn’t do that. Our guys went out and did what they were supposed to do.”

The Titans will carry that positive momentum into their last regular season game at 7 p.m. today (Nov. 8) against Houston Austin in Memorial Stadium.

Memorial ended its regular season last year against Austin, winning 43-14 before moving on to play Foster in the first round of the playoffs.

This year Austin has only one win each from district and non-district teams and is coming off a loss to Kingwood Park 40-13. Even so, Morgan expects Austin to provide a bit more challenge than Wisdom.

“I think they’ll be a good test,” he said. “They’ve got a couple of pretty good athletes that play on both sides of the ball. Their quarterback and receiver also play back in the secondary. They’re really good athletes and they’ll give us a good test as far as running the ball on offense.”

Among Austin’s playmakers is senior quarterback Greg Jones, who’s made 53 of 127 attempts so far this year, along with five passing touchdowns. Senior receiver Demarcus Wiser is tied with Memorial senior Alex Ned for third-most completions in District 9-5A-I at 26, though Ned has 111 more yards gained.

Sanders has considerable more passing yards made than Jones though, with 1,071 yards from 89 completions, one of three district quarterbacks to break 1,000.

With a better record and better numbers, Memorial’s focus this past week has been on just that — focus. Avoiding mistakes and making sure to execute on plays is what Morgan believes will help the Titans succeed going forward.

“I think it’s less about Austin and more about us,” he said. “When we’ve gone out throughout the season and focused and executed what we need to do, we’ve been just fine. Obviously you look at film and there’s stuff every week you could get better at across the board. But Jah’mar threw the ball really well — that was good to see. Backs ran the ball well, caught the ball well.

“We just want to eliminate the mental errors more than anything. I’m looking forward to riding the momentum from last week and continue on.”

Who deserves it more? PNG, Nederland fight for postseason prospects