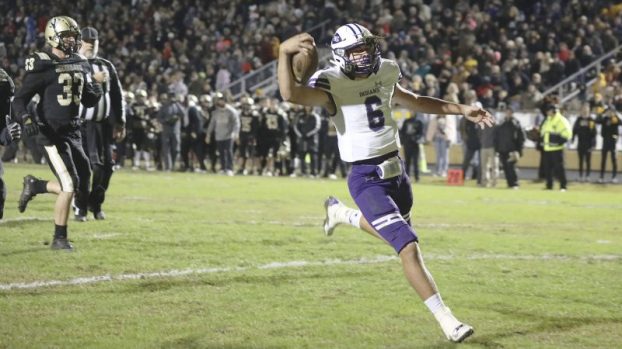 And it’s a shame one team has to come out on the short end of the scoreboard in Texas’ hardest ticket.

But it all came down to a great tackle by Port Neches-Groves senior linebacker Caison Denzlinger on Nederland tailback Josh Mazyck on fourth-and-1 at the Indian 9, which sealed an impressive PNG 27-21 victory over the Bulldogs. 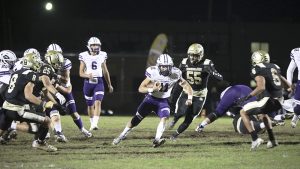 Zane Hernandez (11) of PNG carries the ball as Nederland defenders collapse on him Friday night in Nederland. (Leo Weeks Photographers) 11-8-19

The win sends the Indians (7-3, 5-2) to the Class 5A Division II playoffs as the third seed out of District 12-5A by virtue of Crosby’s blowout victory over Dayton. Nederland (4-6, 4-3) on the other hand, enters the playoffs as the No. 4 seed out of this district.

It’s expected that the Indians will face No. 2 seed Manvel on the road next week at a date to be determined. The Bulldogs will travel to Fort Bend Marshall next Friday. 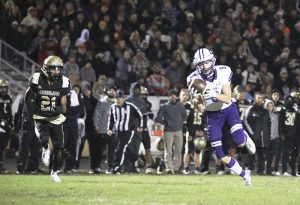 Kaleb Wuenschel of PNG hauls in a pass as Logan Nguyen of Nederland chases him Friday night in Nederland. (Leo Weeks Photographers) 11-8-19

Mazyck, though, had an outstanding night in the mud of Bulldog Stadium rushing for 141 yards on 26 carries including one score.

Senior running back Zane Hernandez, who had set the tone for PNG early when he sped 50 yards on their first offensive play, also had a sensational night with 137 yards on just 15 carries.

Besides the running of Hernandez, the Indians again received an outstanding performance from Bost. The No. 2 ranked passer in 12-5A-II threw touchdown passes of 33, 40 and 36 yards, while adding a 12-yard TD dash of his own. On the night, Bost completed 15-of-21 for 208 yards and no interceptions.

His favorite target on this night was Peyton Proenza, who caught touchdown passes of 40 and 36 yards and finished this chilly evening with five receptions for 88 yards. 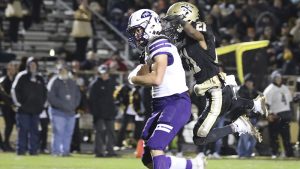 Kaleb Wuenschel of PNG gains yards after the catch as Logan Nguyen of Nederland tries to tackle from behind Friday in Nederland. (Leo Weeks Photographers) 11-8-19

McMorris, the No. 1 rated passer in district, completed 13-of-21 passes for 195 yards and an a score. The district’s top receiver, sophomore Kyndon Fuselier, had another outstanding game with five catches for 83 yards.

Leading by only 21-14, Indian quarterback Blake Bost hit Peyton Proenza with a 36-yard TD strike on the first play of the final quarter to push the PNG lead to 27-14 with 11:52 to play.

Nederland, though, came right back and drove 60 yards on eight plays capped by a 40-yard scoring strike from senior quarterback Bryce McMorris to Rene Cunningham with 8:28 left in the contest to cut the Indian lead to 27-21.

Midway in the third quarter, Bost had hit Proenza on a 40-yard scoring strike to provide the Indians a 21-7 lead.

All this set the stage for Nederland final push, which came up short in this tremendous rivalry.

Bost hooked up with senior Kaleb Wuenschel on a beautiful 33-yard pitch-and-catch touchdown early in the second quarter to give the Indians what appeared to be a comfortable lead at 14-0. Wuenschel had lined up wide right and ran a perfect slant across the middle, made a great catch at about the 15 and went in for the score.

But this is PNG and Nederland, and anything and everything is expected.

After a McMorris 3-yard run around the right side, the Bulldogs were flagged for a late hit moving the ball to the Indian 38.

On the ensuing play, Mazyck displayed his stuff with a 37-yard blast to the one. McMorris sneaked it in trimming the 14-0 deficit to just one score. Payne Barrow’s kick was good as the scoreboard showed 7:26 remaining in the half.

Following punts by both teams, the Indians set up shop at their own 32 with just under four minutes left before half.

Bost and the Indians went to the air and the junior lefty completed passes of 6, 5, 10, 12, and 15 yards to move the wet and muddy pigskin to the Bulldog 5-yard line.

On second-and-goal from the 5, Bost lost 7 yards on a scramble and coughed up the football to cornerback Rene Cunningham and the fired-up Bulldogs at the 30.

A 20-yard blast by Mazyck powered the Dogs to midfield with only 0:03 left before intermission.

McMorris danced around and then fired to Fuselier at the Indian 19 as time ran out. Fuselier, the talented Bulldog junior wideout made an incredible 33-yard reception on the play as the Nederland faithful barked in unison.

Hernandez had set the tempo for the Indians on their first play from scrimmage bolting 50 yards straight up the middle to the Dogs’ 32.

It was Hernandez then trampling through the mud on six of the next seven PNG offensive plays down to the 12.

Bost then called his own number on a quarterback sneak on a 12-yard dash with 5 minutes left in the opening period. Sophomore Tate Sandell drilled his first of two PATs in the opening half to make it 7-0 Indians.

Quinten Root recovered a fumbled Nederland punt at the Bulldog 45 to change all the momentum in the contest. On the following play, Bost hit Proenza on a 40-yard touchdown pass to make it 27-14 Indians.

Bost, who threw for three touchdowns and ran for another score.

Class 5A Division II playoffs begin for both PNG and Nederland. PNG will play Fort Bend Marshall at 7:30 p.m. next Friday at Ken Hall Stadium.

The Memorial Titans roll into the postseason with a full head of steam as they rolled to their second straight... read more