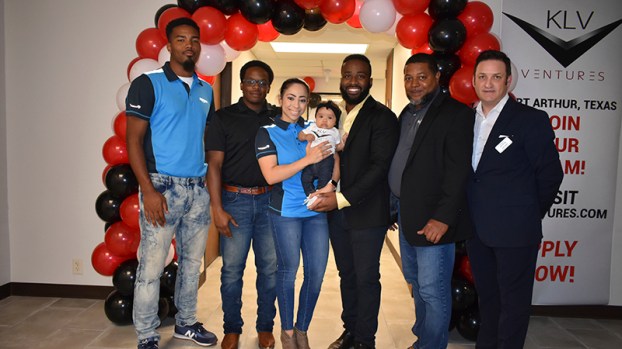 Rainy skies didn’t dampen the spirit of Fred Vernon and associates at KLV Ventures as they officially opened the doors to their headquarters in Port Arthur on Thursday.

Vernon, a Port Arthur native who earned the title 2018 Entrepreneur of the Year in the city, is a busy man with a lot on his plate. Several of his business vehicles were parked outside the new offices at 1 Plaza Square, Suite 204A.

Inside was an archway of red, black and white balloons leading to the main event room where well wishers and members of the Greater Port Arthur Chamber of Commerce gathered in celebration.

KLV Ventures is a transportation company founded in 2017 that has grown by leaps and bounds.

Vernon is a 2006 graduate of Memorial High School who worked in welding at Exxon Mobil for a while and worked in the prison system while saving money for college, where he earned several degrees, including two master’s degrees. He then worked at PricewaterhouseCoopers as a business analyst when he was an undergraduate.

When he began his business he had one cargo van and one employee. Now he has 135 full-time employees, 40 vans for Amazon, 15 with FedEx ground and 17 18-wheelers.

He gives credit for his success to his parents and God.

“Mom and dad stated me off with a good foundation in how they raised me, and to have that relationship with God and know the opportunities come from Him,” Vernon said.

His parents instilled in him and his siblings a good work ethic.

He recalled learning to ride a bike as a kid. It was raining and storming at his parents’ home on Williams Avenue and he was scared. He fell off the bike and scraped his knee. He asked his dad if he could come inside. The answer was no.

“He would do that all of the time. Don’t give up when it gets hard. Keep pushing through it and you’ll find a way,” he said. “That’s the kind of things my parents did. Many times with all of these trucks and all of these employees, there are times that things don’t work out. I keep going. I keep pushing. When it hurts I keep pushing like on that bike. I keep pushing because I know there is light on the other side of the tunnel.”

“Experience the KLV Advantage,” the sign reads inside the office. The locally owned and operated business has earned the JB Hunt Service Excellence Recognition, which is the highest nationwide performance, in November 2016 as well as being an Entrepreneur of the Year nominee for FedEx in March 2017.

The former Tadlock’s Rose Ridge Flowers — vacant and abandoned for years — was torn down on Thursday. The once... read more