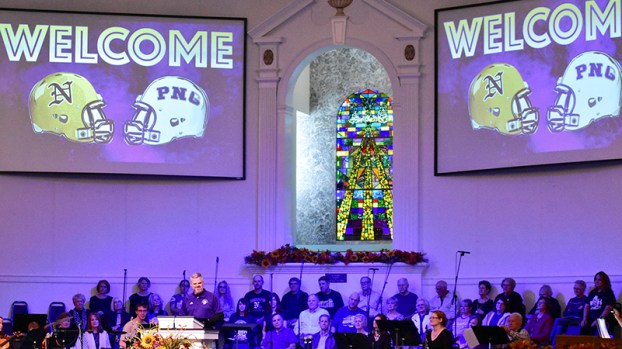 Scott Bartlett, board president of the Port Neches-Groves ISD, addresses those in attendance for a Mid-County Madness combined worship service at First Baptist Church of Nederland on Sunday. (I.C. Murrell/The News) 11-3-19

FAITH AND FAMILY — Spiritual communities come together during Mid-County Madness

“This rivalry has a momentum of its own,” said Barrow, a third-year head coach who graduated from Nederland in 1986. “When you get to the game, you can breathe a little bit. You just show up Friday night and see what the outcome is.”

Sunday also was the day that Barrow and a few of his Bulldogs supporters joined fans of coach Brandon Faircloth’s Port Neches-Groves Indians in a combined worship service at First Baptist Church of Nederland. 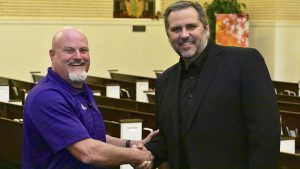 “It’s a neat thing,” Barrow said. “This is my 27th season as a coach at Nederland. This is what these two communities are all about. The fans are married and the homes are divided. My wife was a Port Neches cheerleader.”

The second annual service kicked off a spirit-filled week — in more ways than one — culminating in tonight’s Bum Phillips Bowl. PNG, which won last year’s game 34-21 in Port Neches, leads the all-time series 50-38-7, but Nederland has won six of nine this decade, including three of five since the Bum Phillips Bowl trophy was established in 2014.

“The two churches coming together is fantastic,” said Jason Martin, First Baptist Port Neches pastor. “It’s kind of in the Baptist blood, anyway. We cooperate, anyway, as Baptists, so it’s a wonderful thing once a year to come together and worship together. During the rivalry, we enjoy a little trash-talking from pastor to pastor, but the reality is we love each other because of who our Lord is. I love Jason [Burden, First Baptist Nederland pastor], and I think he’s doing a fantastic job over here.”

Neither pastor is from Mid-County. Martin hails from Monahans, southwest of Odessa, and Burden is from Hico, west of Waco.

“We’re just continuing the tradition we started,” Burden said. “This was a great turnout tonight. We had a great turnout from both churches and people from both communities. I’m just tickled we can get together and like each other ahead of this week.”

At stake in a friendly battle between the pastors is a cup of coffee. It’s not the winner that will taste the java, though. Whoever is victorious will buy the coffee.

“Because I feel sorry for the loser,” Martin said, laughing.

While Nederland’s Bulldog mascot and PNG’s Indian Spirit danced to their respective fight songs in entering the sanctuary, school spirit took second place to the spirit of God.

“We come not as Bulldogs or Indians. We come as one in God’s house,” Nederland Independent School District superintendent Robin Perez told the attendees.

Los Angeles Rams defensive coordinator Wade Phillips addressed the Sunday evening service attendees via video. Phillips went to elementary school in Nederland in the 1950s while his father Bum was Bulldogs’ head coach, and was a quarterback under his dad at PNG before graduating in 1965. 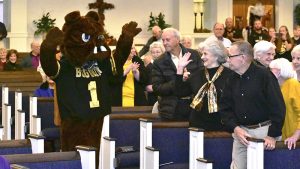 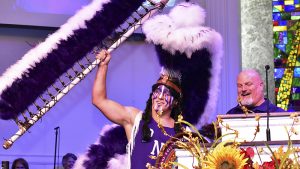 Rob Jones, a youth pastor at First Baptist Port Neches, enjoyed seeing two fan bases sitting together in worship, even in the midst of a rivalry, he pointed out.

“I’ve noticed among teenagers, they get along better than adults,” Jones said. “The adults buy into the rivalry a little more.”

Jones, a Cleveland, Texas, native, said he’s lived in several communities but has not been part of a rivalry with as much importance as Mid-County Madness. Dave Campbell’s Texas Football magazine once ranked PNG vs. Nederland as the top high school rivalry in the state.

“I think the best part of this rivalry — yeah, we support the two schools, and that sort of thing — but I have Nederland folks at my church, and [Burden] has Port Neches folks at his church,” Martin said. “Even though we have those, when we come together, we have one Lord, and that one Lord is what we’re all about.”

Burden, who played football in high school and for a short while at West Texas A&M University, believes “there is something in the water” between PNG’s and Nederland’s football programs.

“We all live in each other’s neighborhoods and there’s such a high level of competition,” he said. “There’s a big investment in excellence in athletics and performances in the bands, the [Nederland] Westernaires and [PNG] Indianettes. Everybody invests so much and wants to do good. When they go out, they give their all. After you do that, you have to put things back together to be community on Saturday.”

A fire that erupted on a Port Neches-Groves Independent School District bus traveling back from Beaumont on Wednesday resulted in... read more