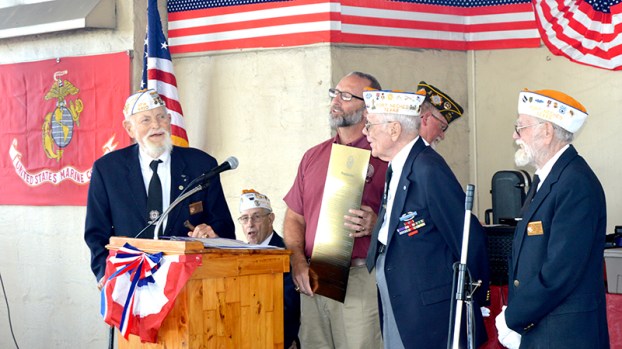 Brent Weaver, Jefferson County Precinct 2 commissioner, presented the Port Neches VFW Post 4820 a plaque with a proclamation from the commissioners court in 2017.

The Veterans of Foreign Wars Post 4820 of Port Neches will host their annual celebration of Southeast Texas veterans at Veteran’s Memorial Park, 7626 Gulfway Dr., in Port Arthur at 2 p.m. Sunday.

“It’s a celebration of veterans who have served and are still with us,” he said. “That’s typically what Veterans Day is for. It started out originally as Armistice Day after World War I. It changed in the 50s to celebrate all the wars and all the veterans who fought and survived.”

The event will have guest speaker Lt. Colonel Gates from the United States Marine Corp., recognition of each military branch, the posting of colors by the Southeast Texas Veteran’s Service Group and a 21-gun salute.

“We don’t want people to forget what different people have contributed to the freedom of our country,” Kitchen said. “We want to thank them for the sacrifices that they made. We want to make the public aware that Southeast Texas has an extremely large group of veterans. We don’t want the community to forget that.”

A live band will also be present to perform the National Anthem and patriotic songs. After the program, food and sweets will be served for attendees.

VFW will also visit multiple schools in Port Neches throughout the next week, including Port Neches Middle School, Elementary and Ridgewood to speak on what makes America great as part of a weeklong series.

Wayne Newsom, a member of VFW who spent six years in the Navy will be speaking at several of the campuses.

“We’re doing this to teach people what the flag means,” he said. “It hurts us to see somebody kneel down when the National Anthem is playing or dragging the flag on the ground. The flag means a lot and it’s important for kids to know what it means and why. We go to these schools to just try and impress and get through to as many kids as we can.”

Kitchen said the main focuses of these celebrations are to honor members of the community and to share what makes it great.

“It’s our diversity and our passion to help other people,” he said. “It’s our motivation to just see a brighter future for our next generations. America isn’t great because it’s America, it’s because of our passion, our freedom, our history and our goals.”

The unofficial results of the special and joint elections show some changes are coming locally with two school district bonds... read more