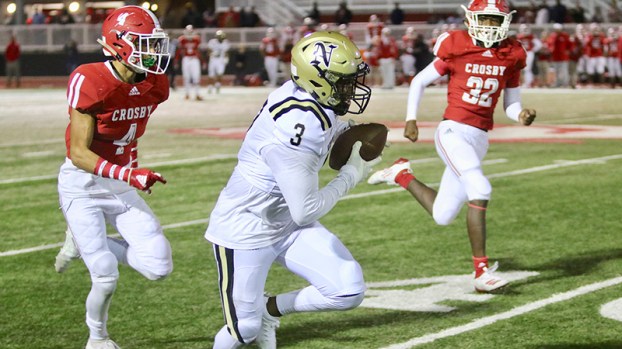 Bryson Garrett of Nederland gains more yards after a catch during a Nov. 1 game at Crosby. (Michael Sudhalter/Special to The News) 11-1-19

If you hadn’t been through it before, you’re not going to know yet what it’s like, according to Nederland head football coach Monte Barrow.

The game Friday between the Nederland Bulldogs and the Port Neches-Groves Indians is a different heartbeat entirely, Barrow said. He encouraged his seniors who had played before to let the other players know what it’s like to play in one of the biggest high school football rivalry games in Texas.

“It was very fun, a lot of emotions,” said senior linebacker Blaze Crowder-Brown, who played last year. “It was a very physical game, and only one person could come out on top. Unfortunately it wasn’t us last year, but I think it will change this year.

“With it being a rivalry, there’s tons of emotions. This could possibly be our last game for either team, but I’ve always loved playing Purple and White.”

Senior wide receiver Bryson Garrett, who didn’t play last year, is not too worried about it though.

“I’m not nervous at all, it’s just another chance to play football,” he said. “I think it’s going to be the most intense game in Texas, like it always is. With all the fans, everybody cheering, it’s going to be loud, so you’ve got to stay focused.”

Preparing for the unique atmosphere that the Bum Phillips Bowl presents is a tricky thing to handle. The game will help decide who out of PNG, Nederland and Crosby will be going to the playoffs, as all three teams are tied for second in District 12-5A-II. Players will also face their own neighbors and friends on the football field.

“Every year, everybody looks at this game differently because it’s the biggest rivalry in Texas,” Garrett said. “Everybody wants to win and put on for the city and bring the trophy home. During the game we’re going to go at you, but after the game we can all be friends. We all grew up together, but during the game, in between the lines, it’s all business.”

“This is a bigger game of course,” Crowder-Brown said. “You prep differently for every game, and I’m not saying other games don’t matter, but you definitely want to prepare different. We’re playing as a team now, we’re playing for playoff hopes. It’s my senior year. I definitely want to win it. I feel like we have all the potential on our team to take a W.”

On the other hand, coaches and players alike will be most comfortable with their usual practice routines. This week was already a deviation from what the Bulldogs are used to, since school was out on Monday, but Barrow said Tuesday was back to being a work day.

“We’re getting ready — as much as you can get ready for this,” he said. “We’re not worried about the effort that we’ll give. There’s a little extra energy in everybody’s step this week, but we just want to make sure we’re sound in what we’re doing on both sides of the football and let the kids decide the game on the field.”

Barrow had this advice for his players:

“Don’t think you know what’s going to happen, because as soon as you think that, the opposite happens, whether it’s a single play, what’s going to happen at halftime, or before the game, or the outcome of the game. It’s just so unpredictable; it has a heartbeat of its own. Just enjoy the ride.”

His first time out on the field, Port Neches-Groves senior running back Zane Hernandez was amazed at how many people... read more