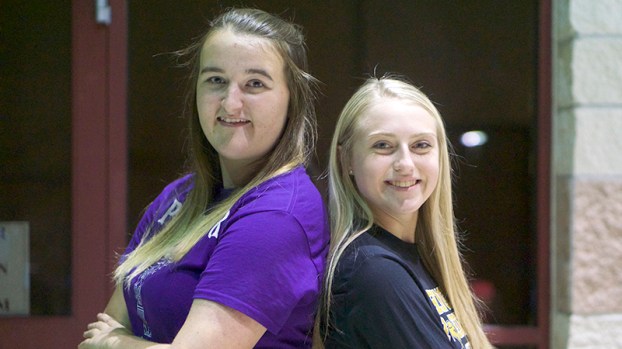 Julia Emanuel, head drum major at Port Neches-Groves High School, left, and Savannah Moore, co-head drum major at Nederland, right, have been friends since they were in diapers. On Friday, their bands will square off in Mid-County Madness. (Courtesy photo)

Savannah Moore and Julia Emanuel have been best friends since they were in diapers. As the only two babies in the nursery at the First United Methodist Church in Port Neches, the pair instantly became inseparable.

Fast forward 17 years and the two friends will become rivals for one night as their bands square off in one of the most iconic rivalry games in the state — Mid-County Madness, aka the Bum Phillips Bowl. The game will kickoff at 7:30 p.m. Friday at Bulldog Stadium in Nederland.

Savannah Moore is the co-head drum major at Nederland High School, a journey that began only last year.

“It’s surprising that I became a drum major,” Moore said. “In middle school I never went for anything, I just stayed a twirler and did my own thing. Then in high school, I met one of my friends, Kaylee Bourque, my junior year and we talked about becoming co-drum majors together. We both wanted to do it and decided to just go for it. Our junior year we didn’t make it, but we tried out again last year and did make it.”

Moore has been a part of the Bulldog Marching Band as a trombonist since her freshman year before also becoming a twirler.

“I fell in love with marching, but at first I only marched with my instrument,” she said. “Then I became a twirler and loved it even more. I loved being on the frontline and that was part of my decision to become a drum major. I like leading the band and being the one that people look to and follow.” 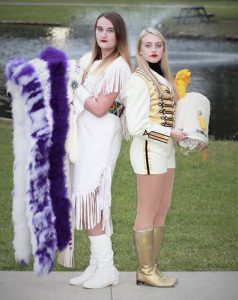 Emanuel’s route to becoming drum major for the Indian Band differed entirely from her friend — she knew it was her calling since she was 8.

“At the church we went to when we were little, I had a role model,” she said. “She was my babysitter when I was in third grade and she was actually the drum major at PNG then. She would come to my house and do some of her work there. I became really interested in it and wanted to do it since then.”

Emanuel started the steps to becoming drum major her freshman year in high school, looking very carefully at her predecessors.

“I looked up to them a lot and worked hard to be where I am now,” she said.

After losing contact with each other for a while, Moore and Emanuel rekindled their friendship in 2016 at Lamar Band Camp, coincidently where their fathers were fraternity brothers in college.

“Later that same year, Julia and I were hanging out at a family Super Bowl party and I had no idea she wanted to be a drum major or that we would both be drum majors,” Moore said. “We were just talking about our lives and I never thought that we would be here together.”

As Mid-County Madness inches closer, Emanuel and Moore said they aren’t letting the century-long rivalry ruin their friendship but rather using it as an opportunity to better each other.

“I want to show PNG what my band is doing and I enjoy seeing what they are doing,” Moore said. “I’m excited for both of our performances. PNG always goes hard on their traditions. I can tell when they are excited from across the football field. So I want my band to do really good, but there is nothing in me that wants them to do badly. I just want to see two great performances on Friday.”

Emanuel said she is slightly nervous to see all her hard work culminate on one final night, but is glad to be sharing the spotlight with those she loves most.

“I’m really excited to see the freshmen’s reaction to their first Mid-County Madness,” she said. “It’s completely surreal. I obviously want to show off what we’ve been working on for so long and show off the people I love and cherish. It’s really all about who makes Friday nights special.”

The Veterans of Foreign Wars Post 4820 of Port Neches will host their annual celebration of Southeast Texas veterans at... read more