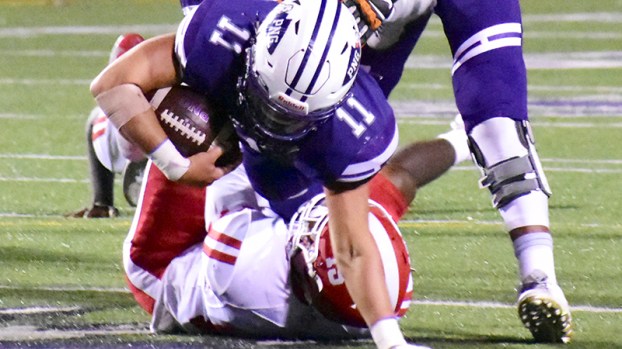 His first time out on the field, Port Neches-Groves senior running back Zane Hernandez was amazed at how many people were in the stadium and how loud the crowd had gotten at the Bum Phillips Bowl.

“Don’t let it get to your head when you walk out there,” he said. “My first time, my legs started shaking, I got butterflies in my stomach, but you can’t let it get to you. You really just have to buckle up and get ready for the ride when you start playing. You’ve got to do your part, no matter what.”

“It’s a crazy atmosphere,” he said. “It’s really intense and it’s really surreal when you go out there and you see thousands of people watching kids play high school football. It’s always nice knowing the city has got our back and is always going to be there for us.”

One of the greatest rivalries in Texas high school football means something special for seniors who’ve gone through the experience before, especially since the PNG Indians live just down the road from the Nederland Bulldogs. As far as the Indians are concerned, they’re looking forward to a solid game against the Bulldogs and another big experience for their respective communities.

“It’s the familiarity,” PNG head coach Brian Faircloth said. “They grow up together, go to church together, played little league together, and for one game a year you go against each other. There are friends, there are parents whose kids go to PNG but the parent went to Nederland, and vice versa. There are so many roads that connect us, PNG and Nederland, so it makes it a special night, and obviously you want your team to win the bragging rights for a year.”

Faircloth certainly isn’t alone in wanting those bragging rights. His seniors want it just as badly.

“[Nederland] being so close to you and knowing you so personally your really want to get this win so they don’t have that bragging right over you after you lose,” Hernandez said.

Both teams are also fighting for the best playoff positions they can get. Barbers Hill took first place in District 12-5A-II, but PNG, Nederland and Crosby are all tied for second at 4-2 in district play. Should Crosby win against Baytown Lee, they will take second place, leaving the winner between PNG and Nederland to take third.

Hernandez and Agudelo know it’s going to be a hard fought game on Friday.

Agudelo has this advice for those Indians that are going to play in their first Bum Phillips Bowl: Stay calm and focused.

“Just take it like another game,” he said. “It’s just another district game, that means the same on our record as every other one. We just have to take it seriously and know what it means for our season, but keep in the back of our minds the rivalry behind it. Just stay calm and do what you’re used to doing.”

Adrian Hayward said it was his first time running the ball like he did for the Memorial Titans against the... read more